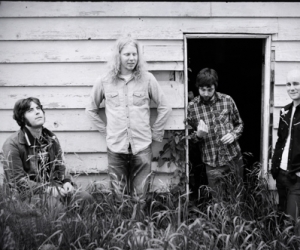 It’s been three years since the world last heard from The Moondoggies. Their new album Adiós I’m A Ghost to me was recorded last autumn at Bear Creek Studios and due out August 13th. News on upcoming festival and US tour dates will be coming soon.

Adiós I’m a Ghost, as a title and explanation of a theme, combines levity with ideas that are no laughing matter. “Adiós I’m a Ghost was, like our [band] name, a combination of a joke and serious ideas. I heard the phrase on a Phil Hendrie podcast…and it grew into something else for me; being able to have life after death. Because we live and die million times in the big span of being around. We transition. And the Moondoggies lived and died and lived again, but not so absolutely…we just shifted away, shed our old skin and now we’re…” Murphy drifts off. “ I hope” he says, “this album relays our want to have no form.”

To shift shapes, much less become shapeless, the Moondoggies had to change: their line-up, the way they communicated, recorded, and wrote. They would have to push beyond the public pigeonhole of being a bearded band from Seattle singing in harmony to give the breadth of their influences a space in the spotlight. For Adiós I’m a Ghost they drew from a diverse list of musical influences from Pink Floyd to Blonde Redhead, Mississippi John Hurt to Nirvana.

With new, old blood and a renewed passion for playing together, the Moondoggies channeled the band’s beginnings: dingy dive bars and DIY house shows, those damp teenage back porch jams, the hours on end spent improvising in their practice space. In the process of recording Adiós…, songs laid to rest were reborn (“Don’t Ask Why” was recorded for a never released album). Others were tirelessly edited until they were just right (“A Lot to Give” has been written and rewritten countless times over the course of years). Others exploded from the electric energy of the studio.  All told, the band recorded 21 songs with producer Ryan Hadlock at Bear Creek Studios.