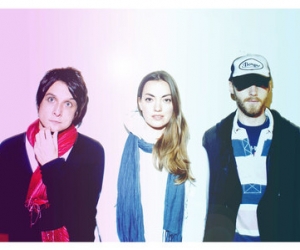 Share on TwitterShare on PinterestShare on PocketShare on RedditShare on FacebookShare on Email
The High Wire, who are named after the Richard and Linda Thompson song “Walking on a Wire,” premiere new track “LNOE” exclusively through Pigeons & Planes on June 11. The single “LNOE,” coming out July 29, will soon be accompanied by a video by Director Mat Whitecross (‘Sex & Drugs & Rock & Roll’, ‘Spike Island’) and an exclusive remix by Ghost Loft. Recorded over downtime, late nights and long weekends in Coldplay’s Beehive Studio in London, “LNOE” is the first track to be released from the sessions and is an early taste of the eclectic mix of styles featured on the band’s forthcoming third album (release date TBA).
“LNOE” was produced by The High Wire, Andy Rugg and Rik Simpson (Portishead, BRMC, Jay Z) and performed by The High Wire with guest appearances from Davide Rossi on strings (Goldfrapp, Röyksopp) and Nicky Brown & Ladonna Harley-Peters on backing vocals (Primal Scream, Madonna, Florence + The Machine).

“LNOE” reflects a side of The High Wire that takes its cues as much from pop and R&B as from shoegaze, psychedelia and folk. The band stripped back the guitar and vocal effects that populated their previous work to shine a brighter light on the songs hiding underneath. The key influence on these most recent recordings is great pop from each of the last five decades – from 60s Motown to T Rex, New Order to Soul II Soul and Gorillaz, amongst many others.

The release of “LNOE” follows their 2010 sophomore album The Sleep Tape (which took its title from a passage in Iain Sinclair and Dave McKean’s illustrated novel ‘Slow Chocolate Autopsy’) and the run of live dates and festivals that followed (including V and Glastonbury).
The High Wire began in 2007 as a vehicle for singer/songwriter Tim Crompton. Tim started out recording tracks solo with Producer Julian Simmons (Guillemots, Midlake), until West coast Canadian Alexia Hagen and UK native Ross Forrest joined Tim as core members of The High Wire and the three-piece vision was established.
http://www.thehighwire.co.uk