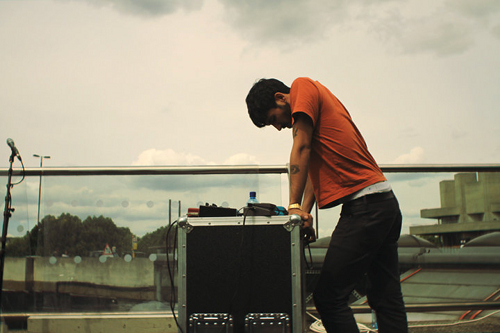 In 2011 with the release of his debut, self titled album, The Haxan Cloak, solo project of multi instrumentalist, Bobby Krlic, appeared seemingly out of nowhere with an impressively fully formed sound that blew away most anyone who heard it. Recorded over the space of 3 years The Haxan Cloak was a wildly ambitious fusion of malevolent strings, junkyard found-sounds and primitive percussion, Krlic’s grand ambitions transcending the fact that it was all recorded in a shed at the bottom of Krlic’s parent’s home in Wakefield, Yorkshire. In the two years since the release of his debut, Krlic relocated to London and began working on it’s epic follow up, and Tri Angle Records debut; Excavation

Bolstered by the concept he was developing for his follow up and a desire to challenge himself into new terrains, Krlic has evolved his sound to incorporate more of his electronic influences. The result is an album awash with serrated beats and cavernous sub-bass, meshing with the classical drones and ghostly details The Haxan Cloak fans will have already been accustomed to. Excavation finds Krlic confidently adopting a more minimalist approach to his compositions, experimenting with space and silence without forsaking any of the intensity that made his debut such a powerful statement of intent.

If The Haxan Cloak was conceived as the soundtrack to a character’s journey towards death, Excavation is its sequel representing the journey after death. Excavation is about disconnecting entirely from this and entering upon a more astral plane, explaining some of the albums more ethereal, ambient moments that are in constant tension with jagged and aggressive elements. This journey isn’t supposed to represent an archetypal Heaven or Hell scenario, but something more abstract and unknowable; the abstraction of the situation being one of its most unsettling aspects. Excavation is another uncompromising, incredibly personal record from an artist who is continuing to operate very much within his own world.