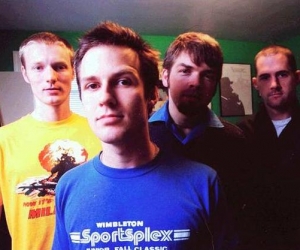 The Dismemberment Plan, the groundbreaking and influential indie rock four-piece, are excited to announce that they have signed to Partisan Records and will release Uncanney Valley, the group’s first album of new music in 12 years on October 15th.

In 2003, if you told the members of The Dismemberment Plan that ten years later they would not only be releasing a new album, but their best record to date, there’s no way they would have believed you. Since forming in Washington, D.C. in 1993, the band has released four highly acclaimed full-lengths, toured the world many times over, and become one of the most well respected-and indefinable-acts in indie rock. But the past decade has seen their members exploring other areas both inside and outside of music, and even embracing adulthood. However, along the way something funny happened: They reunited three years ago to play some shows to support the reissue of 1999’s Emergency & I, and realized their most potent magic had yet to be bottled.

“We never psyched ourselves out and thought, ‘NOW we’re making a Plan record,” explains guitarist Jason Caddell. “It was more like stay calm and play on,” he continues with a laugh. These sessions between the band-which also includes guitarist/vocalist Travis Morrison, bassist Eric Axelson and drummer Joe Easley-resulted in a collection of songs that are inspired because they weren’t burdened by any expectations, allowing them to retain the fire of their nascent recordings while entering a fresh sonic aura.

To be fair, The Dismemberment Plan never thought of their music as a commodity, despite the fact that they have been handpicked to tour with Pearl Jam and shared the stage with peers Death Cab For Cutie on the co-headlining Death And Dismemberment Tour, among other career milestones. “Our goals have always been more abstract than sales and statistics,” Caddell explains. That statement is confirmed by the fact that in the years since their hiatus the members have gone on to thrive in their respective creative and intellectual fields while still keeping music an active presence in their lives.

Case in point, Axelson has been teaching in public schools and playing in various bands, including Maritime; Morrison worked for The Huffington Post and The Washington Post, and now is the president of his own start-up in addition to singing in church choirs; Caddell has been a freelance audio engineer for corporate and political events ranging from presidential elections to the G8 Summit at Camp David, all the while playing on and producing records for his friends and bandmates; and Easley received a degree in Aerospace Engineering, and now works at NASA Goddard Space Flight Center on a robotic satellite servicing program in addition to playing with Axelson in Statehood.

Uncanney Valley was recorded by longtime collaborator J. Robbins (Jawbreaker, The Promise Ring) at his Baltimore Studio, Magpie Cage, and mixed by Paul Q. Kolderie (Pixies, Radiohead), and the result is an album that maintains The Dismemberment Plan’s unique sound while simultaneously allowing them to open up and expand on the foundation of their celebrated back catalog. Produced by  Jason Caddell and The Dismemberment Plan, this is the first time in the band’s history that they didn’t use an outside producer.  “When I listen to this record it’s hard for me to believe we’re a bunch of 40 year olds now,” Morrison admits. “It sounds like the musical heat is stronger than ever.”

This love of music is as evident in the buoyant groove of the Jackson Browne-inspired “Daddy Was A Real Good Dancer” as it is on the sweetly syncopated, electronically augmented rocker “Mexico City Christmas.” “Generally we have deeply broad taste in a lot of different types of music, and it’s not a fashion statement. It’s a genuine heartfelt appreciation, and I think you can hear that in our music,” Caddell responds when asked about the colorful sonic palette illustrated on the album. Whether Morrison is flexing his R&B chops on the quirky, catchy “Waiting” or approaching the concept of a love song in a new and effective context on the quasi-ballad “Lookin,” Uncanney Valley has moments certain to captivate both new listeners and longtime fans of the band.

This spirit of collaboration paired with the members’ diverse taste and life experiences are what make Uncanney Valley such an enthralling listen-and although the group remains unsure what the future holds for them, the most important thing right now is that they exist here in the moment. “We’re very much taking things one step at a time, but I will say that at this juncture the excitement level is high. So, whatever comes next comes next,” Caddell summarizes.