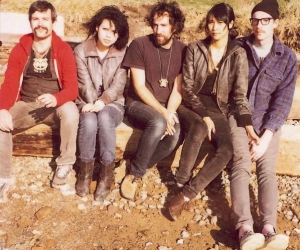 Supporting their latest studio album, Dangerous Anything, Vancouver’s The Albertans are back in their propane fueled short-bus and back on the road, starting in Portland on September 4 and making their way to Quebec for POP Montreal.

Known for their off kilter pop hooks, The Albertans latest album explores a deeper territory that’s often dark and challenging. Set entirely at night Dangerous Anything touches on the ominous, the eerie, and the nocturnally ecstatic. The new video for album track “Jason” seamlessly intertwines the two aesthetics, making previous comparisons to MGMT, CAN, and Sparks as appropriate as ever.

Defects from Alberta, Saskatchewan, and the U.S., The Albertans found each other in Vancouver and proceeded to unglamorously tour North America for the next 2 years, making stops at SXSW, OLIO and Sled Island along the way. Dangerous Anything, is released September 10, on Ernest Jenning Record Co.