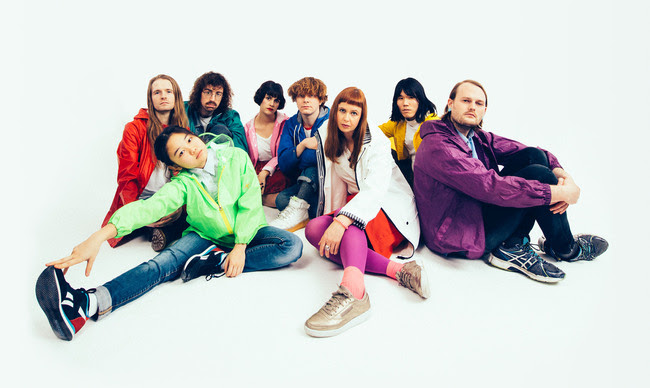 Superorganism is set for release their new album on March 2nd via Domino. Superorganism was recorded by the eight-strong collective, whose members hail from Japan, Australia, New Zealand, the U.K. and beyond, over the course of 2017 in the house/studio they all share in East London (imagine a squat version of the Brill Building, or a lo-fi, DIY take on Max Martin’s Cheiron Studios). Imbued with world-building depth and produced, recorded, engineered and designed entirely by the band, it features the single “Something For Your M.I.N.D.,” as well as “It’s All Good” and “Nobody Cares.” The band will tour North America and the E.U. this spring.

It was in this house that the collective was truly born. Though the housemates had previously created music and visuals together, in various iterations, a track written in January 2017 stood apart from anything that had come before. On a whim, needing a fresh take on the vocals, they sent the music to their friend Orono, a Japanese student whom they met in Asia, who was at that time attending high school in Maine. Orono immediately wrote and recorded a vocal part and pressed “reply.” What came back across the Atlantic less than 24 hours later was an intoxicating piece of idiosyncratic, technicolor pop. That track was ‘Something For Your M.I.N.D.’ – a song that upon its very D.I.Y. release was enthusiastically greeted by music websites across the globe, before being quickly and unceremoniously pulled from the internet due to a sample clearance issue.

At that point in time, it’s unlikely that any of the eight members of Superorganism could have anticipated what would happen over the course of the following months – that ‘Something For Your M.I.N.D.’, despite no longer being available to hear, would have caused a massive swell of interest in Superorganism, and that their follow up singles “It’s All Good” and “Nobody Cares” would end up being played on radio stations across the United States. Or that the band’s identity would be the subject of so much speculation. Or that they would sign a deal with the legendary independent Domino label. Or that they’d soon be announcing shows in Europe, the UK, and the U.S.A., bringing the Superorganism live show to intrigued audiences worldwide.

SUPERORGANISM — SUPERORGANISM
1.It’s All Good
2. Everybody Wants To Be Famous
3. Nobody Cares
4. Reflections On The Screen
5. SPRORGNSM
6. Something For Your M.I.N.D.
7. Nai’s March
8. The Prawn Song
9. Relax