Stone Roses “Made Of Stone” In theatres 11/6 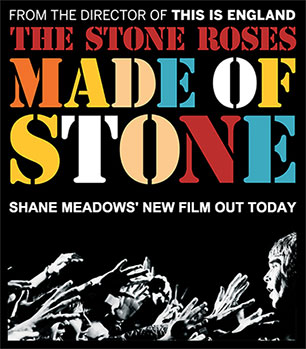 Share on TwitterShare on PinterestShare on PocketShare on RedditShare on FacebookShare on Email
Last year, a resurrection took place that no one thought was possible when critically acclaimed UK band The Stone Roses reformed after a 16-year hiatus. What followed were numerous festival appearances, a sold-out UK reunion tour, and a headlining spot at the 2013 Coachella Valley Music & Arts Festival in California – cementing the band as one of the most important British acts in music history.
With unprecedented access to archives and live concert footage, Made of Stone is a revealing journey through the life and times of The Stone Roses, whose eponymous 1989 debut album has topped NME’s list of “100 Greatest British Albums Ever”. Featuring never-before-seen footage, a cameo by a gushing Liam Gallagher (Oasis), as well as rare glimpses into the personal moments between bandmates, BAFTA award-winning director Shane Meadows (“This Is England”) brings his unique directorial style, humor and emotional depth to the film, capturing the band at work and in their everyday lives as they rehearsed for their much-anticipated reunion, which culminated in three triumphant homecoming gigs at Manchester’s Heaton Park in front of 220,000 adoring fans.

Meadows, a lifelong fan of the band, muses:

“I know what it’s like to miss out on a Stone Roses gig and I know that a lot of the North American fans have been waiting to view this film since the summer, so I’m just glad we can finally share the film with them all. Throughout filming, my love for the music has just grown and grown and to be party to watching something grow is a real privilege. What I saw in those first rehearsals blew my mind, and yet when I returned a month later it was even better.”

The film premiered in North America at the CBGB Festival on October 10th in New York City. Next, it will hit theatres across the US and Canada beginning November 6th. A complete list of participating theatres for Made of Stone can be found below.