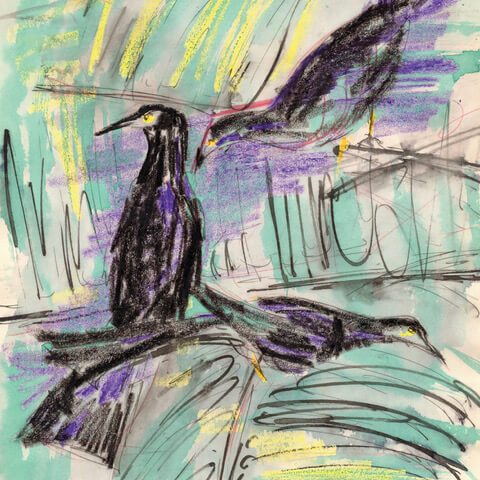 It’s not often that you hear an album where an artist so reinvents themselves that it’s hard to tell them from one album to the next. Carson McHone, a musician from Austin, Texas, who was named one of “Ten Country Artists You Need To Know” by Rolling Stone magazine in 2017, was no slouch to begin with. Her album Carousel was made up of one wonderfully written and performed story after another, usually about the cheating man and her, the faithful lover, left behind, heartbroken. It was pure country heartbreak, but exhibited a real writer, adept at crafting a story and a song.

With her new release, Still Life, she has left not only the hurt woman trope but the country stylings, all but completely, as well. On this album, she sounds influenced by 70s rock, with flutes and saxophones and strings and harmonies pulled right out of that generation, and intricate guitars, sometimes fuzzed out, often more complex than a country tune allows. Her lyric writing also has undergone a grand transformation. Her lyrics which were once direct and cut to the heart, now are no less powerful, but are newly rich in metaphor and poetic language.

“Fingernail moon, I’m just a sliver like you / The fullness I once knew hid behind the blue fingernail moon.” While her previous album may have been two-dimensional, a caricature, though a clever one, this album shows a woman who knows her own depths more deeply, it seems. “A truth I possess, I cannot confess / tell me what do you know of restraint,” she sings on the loping song, “End Of The World.” Whether to challenge or satisfy herself as an evolving artist, or to reach her audience in a way that directness often fails to do, these songs are filled with the wisdom of restraint and the thrill of a pen digging for gold.

The album contains its own heartache. Like she sings on probably the most country song on the album, (though with 70’s guitar introduced,) “Trim The Rose,”: “So I broke our standing mirror and I did not tell you why / It’s ‘cause I saw the tears coming and you don’t like it when I cry.” But in the songs, like this one, there is a poetic redemption. “It’s why we trim the rose / to help it grow.” She ends the album, showing perhaps the hours and days and years of creative effort that went into this album, and the woman who has learned to tell a story with multiple sides. “Don’t let the light in / there’s nowhere to hide / and when you write it / say that I tried.”

It’s an effort in futility to compare the two albums. They’re both great in their own way. But it is certainly a thrill to see a talented artist, like herself, undergo a transformation that works so well. She might be able to draw her country fans along with her, there’s enough country music sensibility on the album. But she’s definitely gonna have new fans because of this album, and a million new directions that she can go in, from here. It’s no wonder Merge Records/Loose (Destroyer, Caribou) picked her up;  she fits right at home on the label.