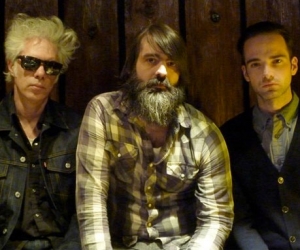 SQÜRL have announced EP #2, the 2nd part of their trilogy EPs out November 5th via ATP Recordings. The new EP is limited to 1000 copies available on deluxe limited edition 12” picture disc vinyl. In celebration of the new EP, Nick Zinner has made a radio edit remix of “Pink Dust,” a track from EP #1 that is available as a download code when you purchase EP #2 on vinyl. Check it out here.

SQÜRL began in 2009 when Jim and Carter teamed with producer/engineer Shane to record some original music for the film The Limits of Control. Echoing the varied Spanish landscapes captured in the film, the three emerged with a set of slow-motion psychedelic rock n roll songs (Releasing them as Bad Rabbit).

Following these scoring sessions, Jim, Shane and Carted continued to record new originals while also exploring the back-alleys of American country, noise and psychedilia. Now having changed their name to SQÜRL, the group has readied a series of EPs of these songs, recorded over a 3 year period by Shane at Treefort Recording in Brooklyn, NY.