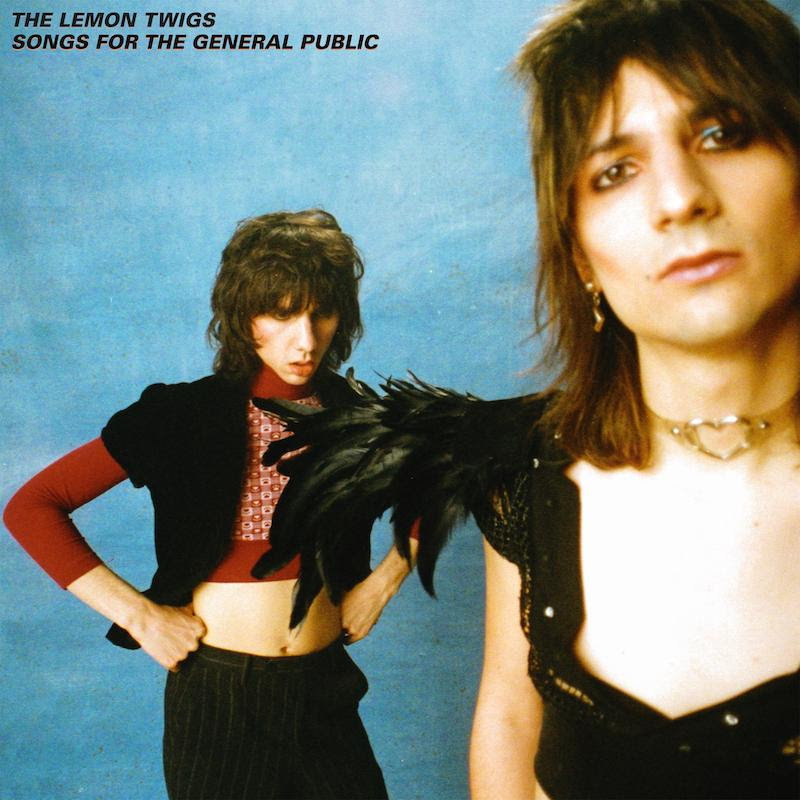 Songs For The General Public

The Lemon Twigs sure do know how to throw a party. Listening to their new album, Songs For The General Public, feels like you’ve taken a time machine to a smoky backstage green room in a late 1970s arena. The room is crammed with people. Androgynous rockers replete with leather jackets overtop bare chests wearing impossibly oversized sunglasses and platform shoes and there’s enough cocaine lying around to, as Robin Williams once said, make you feel like God is telling you, ‘you’re making way too much money’. Brothers Brian and Michael D’Addario have been crafting this kind of time warp, Bowie indebted rock n roll since their debut, Do Hollywood, in 2016 when they were just teenagers and since then have grown as songwriters and musicians that even the pastiche of this golden era of classic rock that they tend to pull their inspiration from doesn’t overshadow their adeptness at crafting their own uniquely perfect pop songs. While this backstage party is overflowing with celebrities, Elton John is discussing Tumbleweed Connection with Gregg Allman in one corner while members of Sweet and Slade trade off guitar licks and Bowie, Brian Eno and Tony Visconti casually survey the room. In the centre of it all, conducting the proceedings are the D’Addarios. Putting every piece into a place that transcends imitation and makes it wholly their own.

There are so many musical touchstones flying around the 12 tracks on Songs For The General Public. Album opener “Hell On Wheels” kicks off with a stunning string section before some aptly snotty vocals take over and launch into a huge ear worm of a chorus, replete with gang vocals and guitar-monies. You’re hearing a bit of Bowie, a bit of The Stones and in the song’s outro, D’Addario even seems to be mimicking Dylan. There’s a lot going on here but the production keeps everything shiny and separate enough for the listener to be able to take it all in. “Live In The Favour Of Tomorrow” sounds like the brothers are taking a page from 60s era The Kinks. The bubbling bass line isn’t just taking a walk through the song but seems like it’s running an obstacle course. Even with the hyper active rhythm section and chiming, shiny guitars, the D’Addario’s vocals tend to take centre stage. What they may lack in their lyric writing, which tends to feel fairly cliche, they definitely make up in their vocal adeptness. Their vocal melodies and harmonies positively soar across the entire album. Musically, the playing is top notch as well. “No One Holds You (Closer Than The One You Haven’t Met) features some absolutely exquisite keyboard and synth work including an amazingly fun solo that acts as the song’s middle eight. “Fight” jumps off, buoyed by a bouncy piano line and some fun Jagger-esque vocal moments in the verse before it rockets off into a huge chorus that’s more the D’Addarios take on 1950’s rock n roll than anything else on the record. It’s colourful, fun and will get stuck in your head for days. “Moon” starts off with some blues-y harmonica before it morphs into something that wouldn’t feel out of place on Bat Out Of Hell. The giant, lofty harmonies in the chorus and lyrics about “walking around in the pale moonlight, feeling like you want to get out of here” will put you right back into that album’s heyday. “Hog” leans into a bit of the schmaltz of early Engelbert Humperdinck but it retains enough edge to make it more palatable, especially when the bridge rolls around in its distorted, stomping glory. By the time the Laurel Canyon folk tinged “Ashamed” closes out the album you definitely feel like The Lemon Twigs have just walked you through a rock n roll history lesson.

While The Lemon Twigs do wear their influences so clearly on their sleeves, the brothers are wonderful musicians and songwriters in their own right. Songs For The General Public is a blast of a record. The journey it takes you on is so enjoyable that it should make the newly initiated want to search out the influences dropped throughout the album and while it won’t make the listeners familiar the music lifted forget about any of the amazing artists referenced, it should definitely give you an appreciation of the D’Addario brothers as not just classic rock archivists but monumentally talented performers. The album is a sleek and shiny blast and one that should be the perfect soundtrack to these dog days of summer.

order Songs For The General Public by The Lemon Twigs here