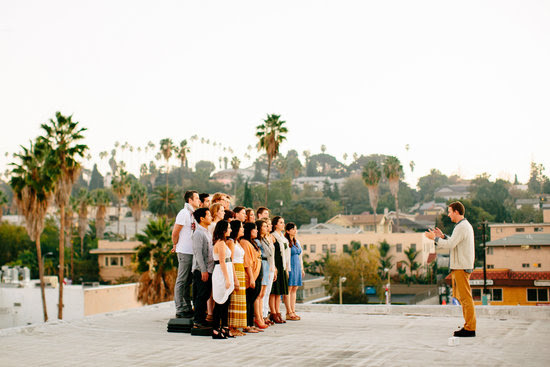 In 2015, The Silver Lake Chorus released their debut self-titled full-length album, featuring arrangements of rare and new tracks written for the Chorus by Sia, The Bird and The Bee, The New Pornographers, Ben Gibbard (Death Cab for Cutie), Justin Vernon (Bon Iver), and many more. Some songs were performed entirely a cappella, while others included drums, synths, string arrangements and other instrumental touches.

In 2010, Australian singer Ben Lee attended a rehearsal of the recently formed group and sat among TSLC members as they sang their cover of Beck’s “Lonesome Tears.” Blown away by how the song had been “reinvented into this massive Russian Gregorian chant,” Lee suggested the chorus take a completely original indie rock approach to the ancient choral art form. He signed on to produce their debut album and reached out to other artists and friends, asking them to write new music for the chorus. Ben Gibbard of Death Cab for Cutie, Wayne Coyne and Stephen Drozd of The Flaming Lips, John Roderick of The Long Winters, Inara George and Greg Kurstin of The Bird and the Bee, A.C. Newman of The New Pornographers, Aimee Mann, Sia, Tegan and Sara, and Justin Vernon of Bon Iver all responded with songs.

The Silver Lake Chorus’ debut self-titled is out now via Six Degrees Records.