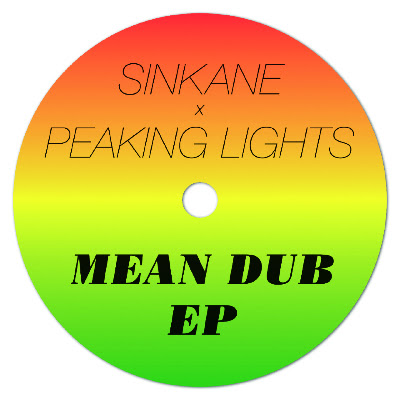 Approaching a busy festival season, including a performance at Glastonbury Festival this weekend plus Womad and Meltdown later in the summer, Sinkane has joined forces with Peaking Lights for a 12” EP release entitled Mean Dub, to be released on August 21st via City Slang.

Including the tracks and “Hold Tight” and “How We Be,” there is also special attention given to one of the band’s signature live jams “Galley Boys,” a song that succinctly explores the spiritual overlap of reggae and country western music with floating pedal steel atop a heavy reggae beat.

Combined with Peaking Lights’ dub aesthetic, there is perhaps no finer example of the stylistic multiverse for which Sinkane is known, than this version of “Yacha.” It is the first taster from this 34 minute EP.

The two bands met whilst on tour with The Atomic Bomb Band (the William Onyeabor tribute project for which Gallab acts as music director), and quickly developed a mutual admiration for each others work.

“Dub is the epitome of music to me”, says Sinkane’s Ahmed Gallab. “It’s the concept of re-defining, re-appropriating, and re-interpreting an idea. Putting a different spin on something that already exists. It’s collaboration and renovation. I’ve always wanted someone to make dubs of Sinkane songs and these Peaking Lights joints have come out really beautifully and have shed an amazing new light and energy on our music. We can’t thank Aaron enough for these jams and the amount of work he has put into them.”

Aaron of Peaking Lights commented: “Sinkane are such a pleasure to tour with! When I first heard Mean Love I was blown away by it’s soulful psychedelia – not just a wash of reverb and delay psychedelic, but literally a new mind expanding approach to songwriting… Then I got into the stems to do the dub, and the fire within was lit!

Ahmed’s voice is amazing! Jaytram’s drums and Ish’s bass are fully locked in, and Johnny is a straight up shredder on guitar. I’m really, really happy with how these turned out, I hope you dig’em too. I hope I kept enough of the original essence that was already so beautifully laid out and freaked out enough for your trip.

Sinkane also play with Atomic Bomb! Who Is William Onyeaboar on the following dates: