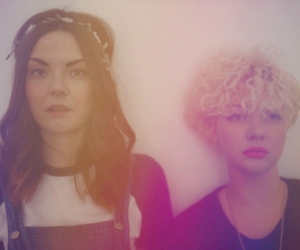 Glasgow, Scotland two-piece Honeyblood just released track “Kissing On You” for fans to stream, in conjunction with the FatCat release this week of their debut 7” single “Bud.” The urgent lo-fi punky charm found on the “Kissing On You” B-side compliments the rootsy, chanting glee of the “Bud” A-side, produced by Rory Atwell (Palma Violets, Veronica Falls). Comprised of Stina Tweeddale (vocals, guitar) and Shona McVicar (drums), the band’s debut album is set for release in 2014.

Since their formation in early 2012, the duo have supported acts including Palma Violets and Sleigh Bells, as well as performed at festivals everywhere from Brighton, UK’s The Great Escape to their native T in The Park. But they started out with humble DIY beginnings, organizing their own guerrilla show at The Old Hairdressers in Glasgow to commemorate the release of a raucous two-track cassette entitled Thrift Shop, recorded in their kitchen with one mic.

It was at that early show that FatCat first stumbled upon the band and their signing continues the Brighton-based label’s strong run of picking up on the best new Scottish talent at a nascent stage. Honeyblood follow The Twilight Sad, Frightened Rabbit, We Were Promised Jetpacks and PAWS, all of whom were found from demos or early performances.