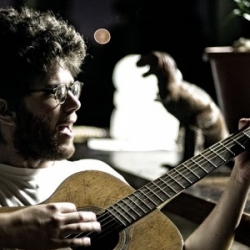 We thought you would like to check out a track from Saul Conrad.

In a bar one night Saul was introduced to a young
novelist, Matthew Coppa, who was speaking entirely
in memorized passages from Finnegans Wake. He
could even ad-lib in the language of the book–or
the language of specific “Ulysses” episodes. It was
angelic sounding and it made Saul hear the music in
Joyce, in words, in writing. He had been writing
songs, but felt that the lyrics were always at the
expense of the musical ideas, or vice versa. He
switched back and forth between attempting songs

and writing poems and short stories.
Several years later, in late 2011, Saul heard
Townes Van Zandt for the first time, and
experienced how blissfully and wholly and perfectly
his lyrics melded and dissolved through his music;
how the music seemed to arise out of the words.
He was inspired to start writing songs again. He
called one of his closest friends from college,
Katie Schecter, who had been part of his old band,
and asked her to sing with him again. He told her
he had a new record: country songs with chickens
clucking in the background. (The chickens never
materialized) They drove all night (after one of
Katie’s late shifts at a midtown bar) to Rochester,
taking small back country roads which put him in
the right mood for the recording session.