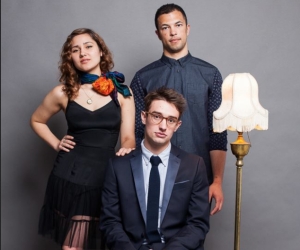 Brooklyn based band San Fermin have released their debut album today on Downtown Records. A pastiche of post-rock, chamber-pop and contemporary classical composition.

Upon finishing writing the album in the Canadian Rocky Mountains, Ellis Ludwig-Leone enlisted the help of long time friend male vocalist Allen Tate and female vocalists Holly Laessig and Jess Wolfe from Lucius to sing on the record. Taking the female vocal road duties is Rae Cassidy whose amazing, angelic voice can be heard on the live version of “Oh Darling” (above), Huffington Post A-Sides Sessions (below), and across the country as San Fermin take to the road for their fall tour. In addition to the album being available for purchase today you can also hear Ludwig-Leone talk about the new record on NPR’s All Things Considered tomorrow.