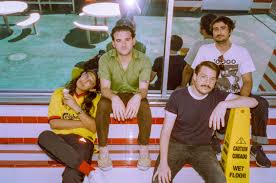 What emerges is a case study of growing up, and being forced to evolve through the eyes of frontman Danny Nogueiras – though not without a good dose of defiance for the inevitable change. “Same is about that feeling you get that nothing’s ever going to really change for better or worse,” says Nogueiras, “Maybe people never change, maybe they constantly change so it just feels like never changing. Who knows?” NO WIN has also announced a 2020 west coast tour with Portland upstarts On Drugs beginning February 27th in Bellingham, WA and culminating March 7th in San Diego, CA.

downey, released in the spring of 2019 on Dangerbird Records, was written over the course of a six-month period in the LA apartment Nogueiras was sharing with his wife. its songs capture a true sense of what it means to be alive, and all the wonder and the sadness that entails.

downey was Nogueiras’ first production at his Balboa Recording Studio in LA – which he built himself – and was recorded with bassist David Jerkovich (Kind Of Like Spitting, Novi Split), drummer Jeff Enzor (ex-Joyce Manor) and lead guitarist Juan Liñan and mixed by producer/engineer John Goodmanson (Blonde Redhead, The Posies, Sleater-Kinney).

Using the album as a way to explore his new studio space, Nogueiras – who has also produced records by Together Pangea, No Parents, and Mean Jeans and toured in Waterloo Teeth alongside members of SWMRS – took his time to make sure that everything on downey was exactly as he wanted and had envisioned it to be. “I got to really indulge in making a record,” says Noguieras, and it shows in the shimmering, sumptuous production of the record itself.

“After making records with so many bands, NO WIN was my very stubborn approach to wanting so badly to make my own music again and get back out on the road,” Noguieras says. “When I started it, I was like ‘I know how I want to do this, I know that I don’t want to make my first record until it can be done what I consider the right way.’ It’s me being stubborn and hardworking and just waiting for this opportunity.”