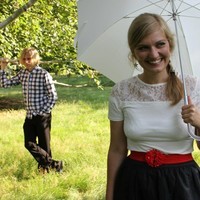 Shapiro recently released a new video for the track ‘If It Doesn’t Rain.’ The clip features the handy work of director Iris Beatrix, who edited footage of a Czech cartoon from 1953 so that the visual perfectly fit with the song’s aesthetic. As Sally and producer Johan Agebjörn put it, “We happened to watch this old Czech cartoon from the ’50s and thought it would fit perfectly to ‘If It Doesn’t Rain ‘ – it has the same chilly feel and it asks the same question as the lyrics in the song: are they really made for each other? So we asked Beatrix, who earlier made fan videos of ‘Hold Me So Tight’,’ Spacer Woman From Mars’ and ‘Deeper Space Woman’, if she could edit the cartoon to fit the song, and we are really happy with the results.”

The melancholic harmonies and 80s disco feel are still present, but there are also indie pop influences (á la Belle & Sebastian), as well as touches of funk, IDM, trance, jazz and ambient. In 2007, Paper Bag Records released Shapiro’s debut, Disco Romance, a nostalgic trip back to romantic italo disco of 1984. The duo was subsequently remixed by Lindstrøm, Tensnake, Junior Boys, CFCF, and Juan MacLean. Known for her shyness, Shapiro does not reveal her real name, will not even let Agebjörn into the studio when she sings, and has never performed her songs live.