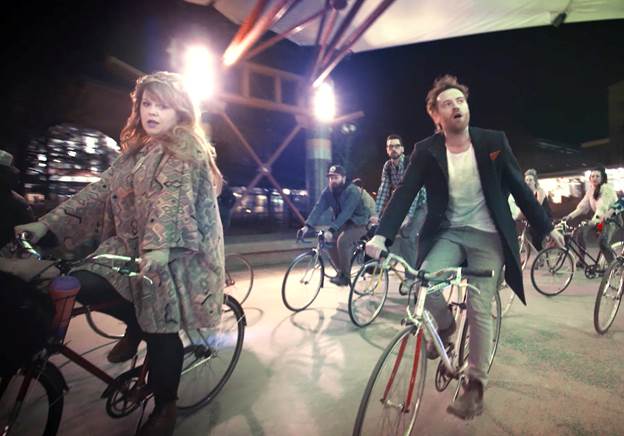 Royal Canoe, recently released a video for their new single “Fussin” featuring Begonia. The single is off Royal Canoe’s Something Got Lost Between Here and the Orbit out now on Nevado Music. Royal Canoe and Begonia have announced extensive summer tours dates in support of their new releases.

We’ve had the pleasure of working with our good friend Begonia (Alexa Dirks) on a number of occasions over the years, but this time we wanted to do a proper duet. So we all got together and wrote this summer-time song. Fussin’ is about a couple going through a little spat. They’re both trying to get their way at the other’s expense – pushing buttons and playing games.. Of course they make up in the chorus and get back on track.

We shot the video in Winnipeg during one of the Bike Jams put on by the Rainbow Trout Music Festival. Several hundred bikers meet up a few times per summer and take over the city streets.

After two years of writing and recording between tours, Something Got Lost Between Here and the Orbit surfaced. It was co-produced and mixed by Ben Allen (Gnarls Barkley, Animal Collective, Deerhunter), who concentrated their sound-crafting attention on two fundamental elements: drums and vocals.

In addition to a renewed sonic focus, Something Got Lost brings an emotional clarity. But it’s a particular kind of clarity: one you experience when what’s most clear is that you’re really unsure about what’s happening with your life or, unsure about what happened to the life you once took for granted, while you were off experiencing stuff, being busy, accomplishing things. Life, and especially the life of musicians, tends to be shaped by an ebb and flow of leaving and returning, cycling between an extroverted, transient mode of being and one of introversion and staying put.