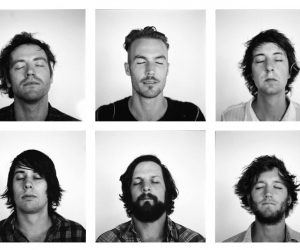 Summer jams and the oddest of time signatures means Royal Canoe is at it again taking their vocoded, double drummer, massive keyboard control centre into the studio and coming out with the latest single “Bathtubs”

Winnipeg’s Royal Canoe is decisively fearless when it comes to bending sonic boundaries. Like mad alchemists in a sweaty, dank, rehearsal space they combine eccentric samples with deep grooves and then toss in a handful of aggressive pop melodies.  And yet you still can’t boil them down and reduce their sound to a single catchphrase.

While 2012 EPs, Extended Play and Purple & Gold, are about floating in strangers’ backyard pools without them knowing and biking all sweaty down roads that don’t actually end, Today We’re Believers leans heavily into the urban side of things, cruising the downtown core at night, sliding under streetlights and letting the warm Manitoba summer invade your space.

You can pre-order Today We’re Believers exclusively from Royal Canoe’s new site (www.royalcanoe.com) with vinyl orders shipping starting June 25th. Although the CD and digital download won’t be available until Sept 3, pre-orders can look forward to exclusive content from the band all summer long.

While the band’s summer tour with Tricky has been postponed until October, Royal Canoe is ramping up for extensive of touring across North America this fall. Dates to be announced.

A six-piece ensemble from Winnipeg, Manitoba, Royal Canoe give you everything, but on their own maniacally hybrid terms. It’s one thing to reference a particular style, or even a range of styles. It’s another thing entirely to grab huge handfuls of sounds from pretty much anywhere, throw them all together and come up with something both cohesive and totally distinctive—something that also happens to ripple and crack with energy.

For live shows, they’d rather lug hundreds of pounds of keyboards, mixers and pedals across the continent (very much like a voyager canoe, in fact) than rely on lengthy backing tracks. They actually play every part, every time. And while their van is packed with hardware, much of that hardware is, in turn, crammed full of widely-sourced samples and adoringly homemade sounds. Their fearlessness about using whatever they feel like is grounded, not in recklessness, but in a decisive confidence.

If you really, absolutely had to reduce Royal Canoe to a single ‘thing’ you could say they catch the moment of explosive, blissful restlessness that hits you when a savage winter finally eases into light, and you feel some actual warmth on those pasty, vitamin-D deprived limbs and all they want to do, suddenly, is move.