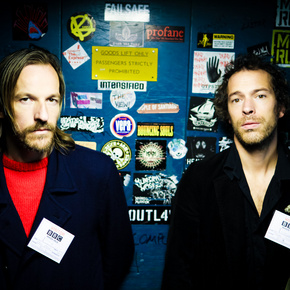 RocketNumberNine, aka London-based brothers Tom (drums) and Ben Page (synth), invite you into their tribal Chingford roots with debut album MeYouWeYou, now being released July 30th on Smalltown Supersound. With a name taken from a song by space jazz crusader Sun Ra and musical influences from Detroit to London to Africa and beyond, RocketNumberNine, have spent the last eight years shaping their hard hitting, modern dance music into what it is today.

Tom met Kieran Hebden while working with legendary drummer Steve Reid. This resulted in the band going on a short tour supporting Four Tet, which then led to Kieran producing and releasing RocketNumberNine’s 14 minute “Matthew & Toby” via his TEXT label. Soon after, an early live collaboration between Four Tet and RocketNumberNine caught the attention of Thom Yorke who invited them to open for Radiohead at the Roseland Ballroom in New York in late 2011. At those shows, material started to take shape for what would later become the first collaborative release from RocketNumberNine and Four Tet, the “Roseland”/”Metropolis” 12″ (TEXT023). This brings us to the present.