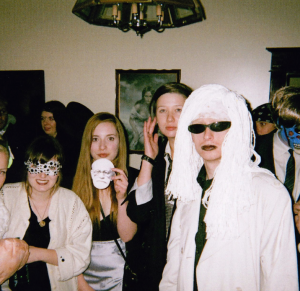 Colour me surprised, even mystified, by Strange Dreams. The melancholy boy I first saw behind the two-piece drum-kit of Mac DeMarco’s Makeout Videotape in their video for “Heat Wave” grew up and started writing ridiculously catchy and equally as genre-stifling pop music for himself. Strange Dreams caught me completely off guard, and my listening experience was all the better for it. While by no means revolutionary (nor, in the same terms, was his bandmate DeMarco), Calder has executed his first full-length with remarkable songwriting worthy of being taken on its own, out of DeMarco’s shadow.

Strange Dreams is less an album composed of songs than it is a painting made of multiple hues. Indistinct vocals sit behind a haze of mostly lo-fi instrumental arrangements that float rather than force. His presence is less felt than hinted at, and like a phantom overhead it makes the listener sit down and seek out the hovering apparitions lurking on each track. His production, which makes tremendous use of weird synth sounds and even weirder guitar ones, hinges heavily on ’60s acid psych to help it along its way, but rather than being caked in the glow of that era’s optimism Strange Dreams sits in a darker world, with blinds keeping the world at bay around it.

The thunderous drumming accompanying Calder’s sonorous chorus in “Memory Resolve” is the record at its most tenacious, but it fades dreamily into “The Morning” and its trance-like analog warble and buried, lackadaisical chirruping. Equal importance is put on the former’s rhythm and momentum as is the latter’s eyes-shut daydreaming, and its this balance that makes Strange Dreams so lovely to listen to. The druggy air and slacker vibes that push and pull through the album are teenage ones, streaming with, if not necessarily innocence, a lack of responsibility that is thoroughly enjoyable. Were it released in the middle of August, the media may brand it offhandedly as a “summer record” with its bright guitars and plucky bass in “Marcel”, but Strange Dreams is ultimately about staying inside and zoning out more than it is about enjoying your life and living it up.

Casual listeners would be forgiven for assuming that Strange Dreams is a new album from Mac DeMarco rather than his old drummer—it’s obvious Calder has picked up some tricks from him, but Strange Dreams trades DeMarco’s blatant (and often irritating) charisma for consistency and melancholia. It’s an album that deserves to stand alone from Calder’s past musical partners for its smoggy atmosphere and understated charm. I certainly didn’t expect to be hearing about Alex Calder again—but now I’m thoroughly glad that I have.