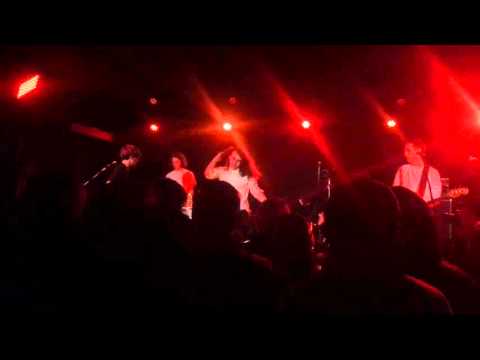 Spector. A band from the UK. Sometimes not knowing exactly what to expect, the stage is set for something to happen. Wait and see. The lure of the unknown quantity.

Of course, there is that one video of Spector’s performance at Reading and Leeds Festival, the thronging crowd singing along, knowing all the words. And Dev Hynes, otherwise known as Blood Orange, produced their latest album, Moth Boys. The lead singer, Fred Macpherson, was previously in Les Incompétents and Ox.Eagle.Lion.Man. Thomas Shickle plays bass. Jed Cullen is on synth and guitar and Danny Blandy plays drums. Those are the details.

And there’s the fact that NYC traditionally is the first port of call for musicians who are looking to break into America. They’re big enough in their home market, usually the UK, that the decision has been taken to test the waters over here. What that means in practice is that bands who have played huge festivals, who have a devoted set of fans, who know their way around a stage, get to feel like it’s the first time all over again. It’s not. But playing your first gig in America is a pretty big deal. It’s a moment, and always illuminating to watch what happens faced with that reality.

So last Thursday, a mixed group of the curious and faithful turned up for Spector at Mercury Lounge in NYC. What was going to happen? Looking at that video of them at Reading, how was all that energy going to fit into the low-ceilinged space of a small club?

One thing about Mercury Lounge is that you’re so close to the performers as they make their way through the crowd, to the dressing room, to the stage. You turn with your beer, and you’re suddenly practically face to face with someone. He looks so familiar. There’s a moment of disconnect before you realize that he is the guy from the videos, the lead man, the host for tonight’s proceedings, Fred Macpherson.

As it’s New York City, a couple of people recognized him and most ignored him. It must be unnerving to feel like you’re starting from zero.

But if you could predict success on only one thing it might be the manager getting in the sound booth and politely but forcefully twirling the knobs for the sound check himself. Not trusting it to anyone else. The sound at the Mercury can be uneven. Hands on the wheel. Will it pay off?

When Spector takes the stage, there’s a second of hesitation, anticipation. And then they take charge and take over. From the very first half of the first song, there’s no doubt. The neat trick of two different microphones, one super processed, one not, to change up the vocals on the first song. Fred Macpherson unwrapping a whirlwind package of charisma and energy, as if the smartest guy in the class had suddenly leapt onto the professor’s desk and started singing his blog posts of searing observation and wit, while notebooks dropped to the floor. His deep, melodic voice and casually intense delivery of lines like “baby if you think you’re lonely now, wait until we’re alone”, “these girls like to pretend they can’t feel anything anymore”, “show me a good time, and I’ll show you a liar”, and “you always read the last page first so you’re ready for the worst” seem made to be committed to memory.

He starts out as he means to go on, taking a moment to passionately kiss the bass guitarist in ironic glam rock style. The band is talented, delivering crisply on every song, tight bass, structured keyboards, ringing guitar, all anchored by a careful drum sound. Spector has modern pop verve, with a dash of an 80s sensibility, mixed with indie indifference and enough attitude to play to the city, without scaring off anyone else. Gathering his long hair back, with his hands in constant motion, Macpherson’s buttoned up white shirt and glasses tear up the rule book on front man image. He stares intently into the eyes of the audience. Behind him, the band rips through the songs.

Macpherson is in charge, and steers the show. He gets the guy from New York who uploads a cappella versions of their songs to come up on stage, and says he’s their biggest fan over here, dropping as an aside “maybe our only fan”. The newcomer may be nervous, but the singer is encouraging him over his stage fright, until he’s creating a big moment. There’s a genuine joy there as they both hug at the end of it. Fred Macpherson may have sheer ego running in his veins, but he’s not afraid to share the limelight with him or anyone else. There’s enough light pouring off him, a searing wit, smart asides for the crowd, always one step ahead.

The stage patter in Chevy Thunder, where he actually stops the song to make demands that he makes seem completely reasonable – is a blood hot example of teetering on the edge, never falling – guaranteeing an audience riveted by his audacity.

By the last song, the crowd is jumping up and down at the front. When Macpherson leaps up and wraps his legs around the bassist until they finally tumble into a homoerotic heap on the stage to screams from the audience, it’s a memorable end to a show filled with stand-out moments. Now everyone knows who they are when they make their way through the crowd. A tall blonde woman places herself strategically in his path for a kiss and a hug.

Songs, attitude, and daring, Spector is a band to watch out for. And the sound was brilliant. 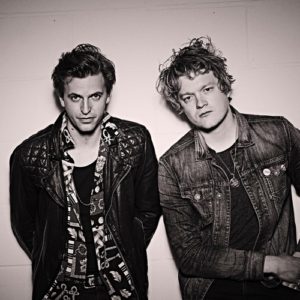 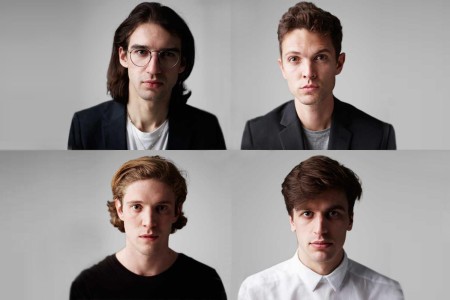 Interview with Fred Macpherson from Spector