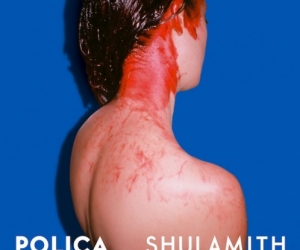 In a recent interview with DIY, Channy Leaneagh, vocalist for electronica act, Polica, simplified her band’s latest record, Shulamith, into five words “Drums. Bass. Synths. Me, Women”. As a concise summation for a body of work that lasts nearly an hour, Leaneagh has not so much hit the nail on the head but smashed it through the plank of wood. Shulamith – which takes its name from Shulamith Firestone, a female activist that founded such radical groups as Redstockings and New York Radical Feminists – is a fluid swell of effervescent electronics, rumbling bass and the interlocking beats of two drummers. Then there’s Leanegh’s vocals, with all the digital trickery, the mouthpiece of the band has her voice manipulated, so that at times her wordplay manifests like an added layer of instrumentation as opposed to pronounced vocals. Be it a melodious mumble or a serene slur, it can be hard to decipher what Leanegah is recounting throughout Polica’s second LP, this however doesn’t dampen the records overall charm.

Polica are something of a dichotomy, the band’s electronic pop is inventive enough to ensure their sound is their own, whilst it’s difficult to listen to Shulamith without forging musical comparisons that crop up throughout. ‘Warrior Lord’ is Radiohead if they never decided to be a rock band in the first place and Thom Yorke was born a woman, ‘Very Cruel’s sinister, shadowy digital menace burbles like Portishead inhabiting a deserted fairground and the rolling, tribal drums of ‘Matty’ is the sound of what would happen if Florence Welch replaced Elly Jackson in La Roux.

Focusing on the inventive side, Shulamith unveils Polica’s knack at sidestepping expectations, ‘Spilling Lines’ bounds into life with “club banger” written all across the opening; a stampede of electronics and bass thumps but the shrill injection of galactic synths positions the track into a more poignant light, as opposed to a euphoric dance monster. The quartet combine a sultry sway with unpredictable barrages of noise on ‘Vegas’ which rattles like all the slot machines paying out at once. ‘Tiff’ mangles dubstep off beats with ethereal electronics that whisper and creep into your ears like a sneaky skilled assassin. This track has such a radar dodging stealth poise you’d almost miss Justin Vernon of Bon Iver’s dulcet coo. The opening track, ‘Chain My Name’ is a lolloping electronic pop corker that’s propelled by an omnipresent beat and synth combo which invokes a Balearic flavour, albeit with simmering dark undertones.

Beguilingly familiar but with enough individuality, Shulamith is akin to sonic déjà vu.