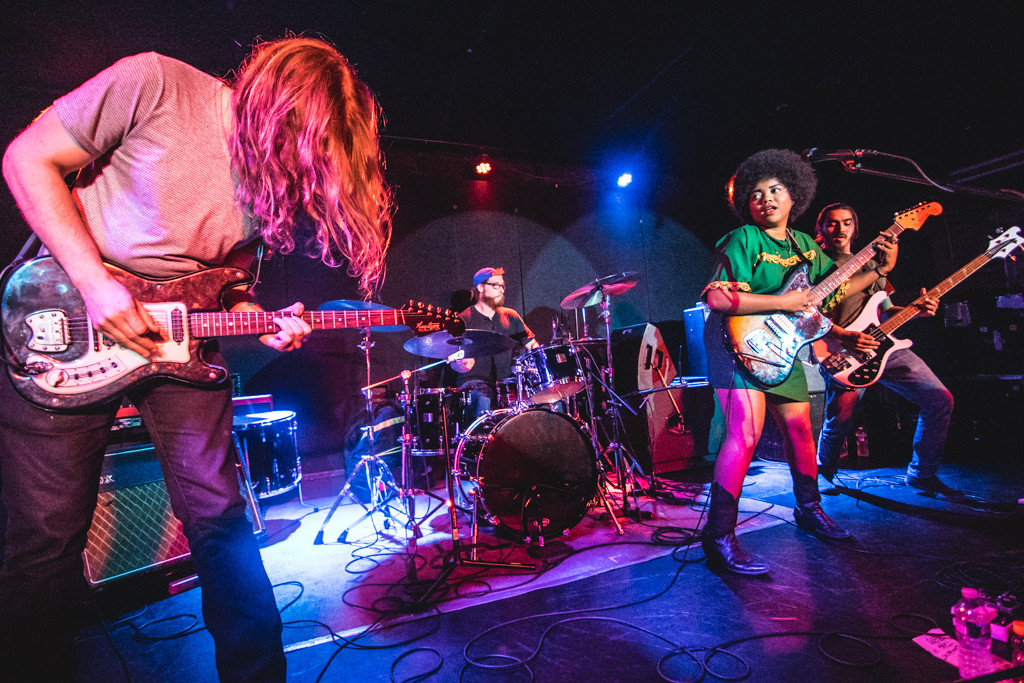 Seratones blew in on a southern breeze to NYC’s Mercury Lounge. Let’s let the singer, AJ Haynes, introduce, just as she did from the stage on Houston Street: “From Shreveport, Louisiana – you can blame us for all the slush and shit.” There’s definitely a warm weather vibe from the foursome, including Connor Davis on guitar, Adam Davis on bass, and Jesse Gabriel on drums. The audience was ready to heat up and by the third song, Necromancer, which is the single and video, Seratones have brought a straight flush of honky tonk, whisky and hip shaking music to banish the cold grey winter world. Their sound – one part southern rock, one part blues, a dash of Janis, a spoonful of Amy Winehouse, and and a few shakes of that homemade bitter you just can’t find anywhere else. The bassist is solid, keeping the train rolling. Nothing flashy, just that stuff that makes you jump on the bar with no idea how in hell you got up there. Adam has got RIP Lemmy in tape on underside of the bass. Connor throws out some fine guitar lines, and Jesse hits the drums like he’s still fighting off any demons they might have met during the filming of the video. Together, they mix up a hard edged backing that might be too a little too strong for some vocalists. But not this one. Haynes is an admirable front woman, playing guitar, coaxing and cajoling the crowd, with a strong set of pipes that doesn’t falter through the entire show. All attitude and a little bit of sass. She introduces a song, saying it’s about when you want someone to come over, and they do but after – “they’ve got to go away”. AJ Haynes is the one calling the shots here. For the last couple of songs, AJ puts down the guitar and steps off the small stage, dancing through the room, and she seems freed from all restriction. She draws attention like branch water from a well, and you’d be mad not to wonder if there’s a solo spotlight somewhere with her name on it. They were great last fall at CMJ, making it no surprise that eyes are on them. With the tour and some TV appearances lined up, Seratones are a band to watch. And going home, when the announcer on the train says “this is a KIngs Highway bound F local train”, it feels like one of their songs, and you’re heading somewhere back in the bayou, with a beat. Rack ‘em up again.