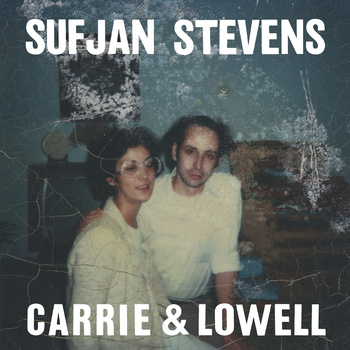 Sufjan Stevens has always held up a persona that is equal parts candid and totally unknowable. He has always been upfront about his beliefs and opinions through various religious songs or weird, ranting blog posts, but in a way, this has always seemed like a character he is playing, merely because there has never been a persona quite like him before. Dresses like a bro; makes heart-wrenching indie pop symphonies. Is a Michigan-born folkie; makes experimental electronic music on a whim. Up until this point, it seems the closest we’ve ever been to the real Sufjan has been Seven Swans, his 2004 folk-based record that primarily contained songs about Bible stories but also had a few glances into his romantic side. Aside from that, Sufjan has often been shrouded behind story songs and mechanized excursions. A passionate voice, taking on many voices.

On Carrie & Lowell, Sufjan Stevens’ first proper album since 2010’s cybernetic masterpiece The Age of Adz, we get a Sufjan that is returning to his “folk roots.” “Return to to form” press releases are always a red flag for disappointment — “Hey, here is more of that thing that I haven’t done in a while that you like!” What protects Carrie & Lowell though from the trappings of water-treading is its content. Never before has Sufjan been this candid about his life, using the death of his estranged mother as the basis for the record. Much like the mother character in Michigan’s heartbreaking standout “Romulus” (which may very well be autobiographical), Sufjan has mixed feelings about Carrie — love and frustration which is damaging to his whole life. On “No Shade in the Shadow of the Cross,” he sings about getting drunk to get laid, and there is a lyric about him masturbating while his girlfriend checks a text on her phone on “All of Me Wants All of You.” Not every song is about Carrie, but his disconnect in his adult life is based greatly on her lack of presence.

Despite the damage to his psyche, given through multiple times in his life where his mother took leave of him (once in video store, which he sings about on “Should Have Known Better”), he still longs for his mother. On “Death with Dignity,” he sings, “I forgive you mother, I can hear you, and I long to be near you, but every road leads to an end.” There are traces of this naked emotion throughout Stevens’ career, but never this candid and certain. In a way, this record is like his Sea Change or even Vulnicura, the mysterious artist finally showing you themself through heartbreak.

Musically speaking, yes, it is a “return to form,” only that there are familiar sounds throughout, like tightly plucked guitars, banjos, and gentle pianos, but there is a newness to his approach. Many times, the ambience around the tracks recalls the scores of Thomas Newman, having a glow to them that is cinematic and absolutely gorgeous. On “The Only Thing,” an echoing electric guitar comes in and opens the sky up. On “Fourth of July,” an eerie array of rustling guitar tones, keyboards and swaying piano plunks create an unreal atmosphere that makes his refrain of “We’re all gonna die,” equally harrowing and beautiful. “Carrie & Lowell” might be the most hopeful sounding song on the record, with fluttering arpeggios, lapsteel, and even a little bit of sleigh bells, recalling some of the magic of his surprisingly astounding Songs For Christmas box set.

There is much to love about Carrie & Lowell for both longtime fans, and those finally looking to hear what this Sufjan guy is about. It is quintessentially him, but offers a new side that is so human and powerful. It’s interesting being a fan of his, who pretty much hates all his extracurricular projects (I was not into s/s/s, his Run, Rabbit, Run, collaboration with his stepfather, or The BQE), but always being this impressed when it’s time for him to make a real album. Every time Stevens he returns for real, he never manages to fall any short of brilliant, and there is always a new door he is ready to open and bring you inside.