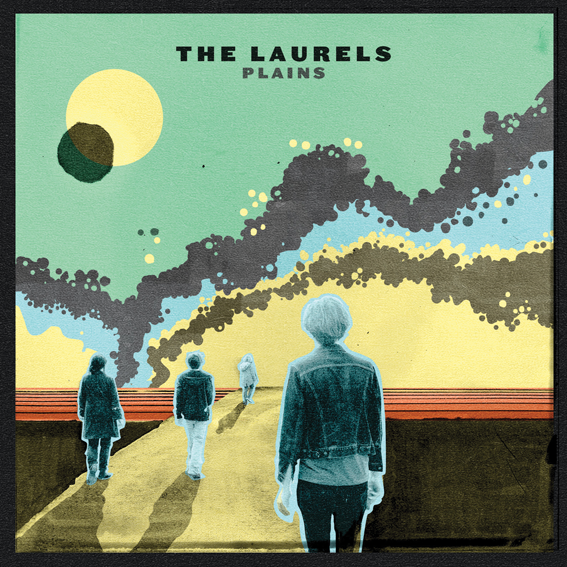 There’s definitely something psychedelic going on in the southern hemisphere, or more accurately, down under in Australia. Perth based trippy mongers Tame Impala have garnered attention with their sprawling wigged out soundscapes and across the country in Sydney, The Laurels are invoking the same strung out whirs of endless kaleidoscopic frontiers. What’s telling though is that each band is a product of their environment, Tame Impala reside in Western Australia where quite frankly nothing happens, which when you realise Tame Impala’s latest effort is called Lonerism and they also have a song titled ‘Solitude is Bliss’ makes sense of their isolated sonic tapestries. The Laurels however call Sydney home, a sprawling metropolis, bustling with life, and somewhere buzzing with a 24 hour existence and understandably this urban hive permeates through into The Laurel’s debut record, Plains. Unlike their brothers in psyche, the New South Wales gang’s spiralling shoegaze has a more claustrophobic feel where you can sense the buzz of early morning commuters and the spirit of the city coursing through Plain’s core.

Psychedelia always provokes the notions of ever changing visions of garish colours twirling in a never ending spiral, which can be heard on Plains, but the vibrancy is replaced by the darker shade of the colour palette. Throughout Plains the colour ratio slides more towards the mauves, crimsons and deep blues than anything too luminous. This coupled with a more urban feeling takes the band’s debut LP away from the traditional assumptions of a psychedelic record and into something a little darker with an omnipresent menace.

The record’s first three tracks, ‘Tidal Wave’, ‘Changing The Timelines’ and ‘Traversing the Universe’ all lurch with an imposing, brooding sound that is churned out by the dual guitar motifs of Piers Cornelius and Luke O’Farrell, these elements are then combined with Conor Hannan’s hypnotic bass and topped off by the steadfast drumming provided by Kate Wilson. This triple threat is followed by an endless endeavour of meandering until ‘Manic Saturday’ shatters the equilibrium with the sound of a city constantly on the move.

Plains is the sort of record where you can smell the exhaust fumes but picture the wide open expanse of nature in the distance, an album that is juxtaposed with the tension of inhabiting an over populated human cauldron with the mesmerizing unpredictably of bitter sweet bliss. Embrace the dark kaleidoscope of sound!