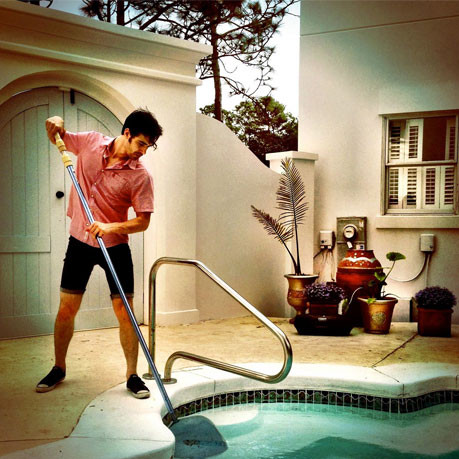 There is something in the PBR over in Toronto. Moon King are a shining example of this wave of bands taking these relatively low budget EPs and making them sound like they’ve got some big label production value.

Obsessions II, is the cleaner, more coherent older brother of last year’s EP, Obsessions I. The album sounds as if a fever dream were set to music. The soundtrack that results is swirly and illusory but there is something about it that keeps you alert, that keeps the dream vivid. The sharp snare that punctuates each track is the trick to keeping Moon King’s latest effort from falling into the ambient background music pile… that and the sweet sweet synth lines.

Maddy Wilde narrates the dream with vocals sound like distant siren cries. Originally the vocal melodies were recorded by the other half of the band, Daniel Moon King, while being lost in Vienna. After wandering all night on the final date of their tour, Daniel set up camp in an Austrian train station and recorded the melodies with the natural reverb of the empty station. It wasn’t until the final night of their recording process back in Toronto that Maddy laid down her version of the tracks.

Dreamtrap is the song that I think really defines this concept of this dream that sticks with you. The opening keyboard tinkering sounds almost like if you were hearing the soundtrack of Mario Party being played a floor above you. Then this magnificent spiral of ethereal synths and silvery guitars comes to surface, Wilde’s vocals appear with an unintelligible delicacy and echo through the mechanical drum beats… you’re in. The rest of the album plays out in the same down the rabbit hole kind of way… you’re on a trip, but there is a mindful tangibility to the journey.

Moon King have really progressed with this latest album. When a band’s first release presents a new and distinct sound I think it’s really easy to label it as “signature” and recreate the whole thing over the next year, but Moon King have taken all that impressed with their first album and not only heightened it, but added to it.