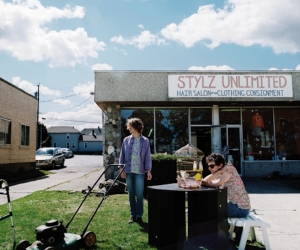 In 2008, MGMT had the dance song of the year with “Electric Feel”. It was a spectacular debut that included other hits “Kids” and “Time to Pretend”. Time does weird things to our memories though, because even if you did listen to the entire album you may only remember those electro-pop highlights, and forget that the album was actually more psychedelic-pop than anything. This was confirmed with their follow up album Congratulations which all but abandoned the synth-pop style with a more straightforward pysch-rock direction. There was nothing straightforward though about that album, which was actually a lot more complicated than perhaps fans were prepared for, even if most critics applauded it. Even as MGMT prepare to release their self-titled third album, our memories will always be with those dance friendly numbers off the debut album. MGMT though is an album that may just start to change peoples perception of the band, as it firmly entrenches itself into all things psychedelia with fascinating results.

MGMT is not only releasing a new album of music, but a musical experience complete with visuals that will accompany the album’s release. At the time of this writing I was not able to get a hold of any of that material, but judging from the sounds alone, it’ll be worth it. As the band shifts itself from its dance roots, it sees the band inching closer towards Flaming Lips territory. That can be heard clearly on the first track “Alien Days” which despite its ethereal beginning and soft spoken childlike lyrics, it’s actually an exciting start to the album and lays groundwork for themes that will return later. “Cool Song No.2” is a ridiculous title, but shows the band not taking themselves too seriously which can be a very dangerous road for a psychrock band to travel. The track is synth heavy, and captures a modern reinterpretation of 60’s psych inspiration, with the ghost of Syd Barrett starting to shine through. “Mystery Disease” really is the gem of the album though, a bass-heavy synth with a drum track that captures that psychedelic feeling of being on drugs without having to inject anything. That seems to be the real evolution of MGMT, where the first album really may have been about having fun and doing drugs, they have found a new way to create music that simulates that feeling without having to do them. It may not make you get up and dance, but your brain will be spinning. It’s at this moment then that they throw in an actual 60’s psych track with the anthem “Introspection”. It’s a cover of a Faine Jade song, an obscure artist, but the track has that classic early Pink Floyd feel. “Your Life is a Lie” continues the journey with a catchy short two-minute-psych-pop track, which bridges the next three pysch heavy tracks “A Good Sadness”, “Astro-Mancy”, and “I Love You Too, Death”. The songs meld into each other, and it would be easy to write them off as filler, but it’s really here where the album makes or breaks. The album has already been humming along, but it’s here where you see that MGMT does have a firm understanding of this genre and that they are not just pretenders but new pioneers. “Plenty of Girls in the Sea” may have been my least liked track, mainly because I’ve always hated that phrase, but the song is just so god damn catchy, that you’ll be hard pressed to write it off. “An Orphan of Fortune” ends the proceedings not on the highest note, but sometimes an ending is just an ending, and if that track doesn’t hold up on it’s own, it’s still an ending to a fairly strong album.

When you hear about bands drastically changing their direction, you are also bound to hear backlash of fans. It seems though that with MGMT it might have been a wait and see approach. If fans weren’t completely sold on Congratulations, they might be with MGMT, but that still remains to be seen. People will not be able to forget the synthpop beginnings the band started with, but as long as they embrace their past as they move forward, fans may start to have a new perception and appreciation for them.