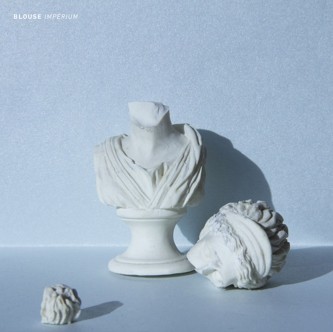 Last time Blouse checked in, they were a wavering presence. Hypnotic -deliberately imperfect spirals of song with a handheld quality. Well-received and rightfully so.  Now Blouse are back  with a new record, “Imperium”, and the the hovering question is “Whatcha got (this time)?”  Answer? A more focused, sharper version of  their trade-stamped sound — fuzzed bass and steady rhythms yes, and Charlie Hilton’s vocals, which seem almost separate from the music to which she’s singing.  Her voice almost to “visit” these songs during their duration, echoing above and around, waving like a wind pushed flag all over the melody and energetic rhythms.

If their previous effort was bathed in warm gushing and receding synth lines, the main difference on “Imperium” is that the guitar, and the drums and bass are in the driver seat this time. If the last record was a sunny haze of a thing, this record is an icicle in the same sunlight.  Focused, tapered, harder. Album openers, “Imperium” and “Eyesite” make this case.  Though “Eyesite” pulls you in with an opening echoing chorus,  it’s a prelude to a sucker punch and a brief prelude at that as the strumming guitars and a loping bassline take over.  Hilton’s vocal is a rushing chorus of cloned angels whose echo bounces off of everything including itself  at the end of the song which folds in on elements as the echoing collides against echo, and the decaying voices take the song away.

Something damned interesting happens next. A gear shift. “1000 Years” is a shift. A cleaner, clearer vocal. A crisply strummed guitar and a measured bassline holding a crafter melody together.  Drum subtly laid back in the mix, the song reads Hazelwood/Sinatra and bounces along cheerfully. “In A Glass” and “Capote” carry on this trend of new explorations.  The reverb returns to the vocals but they are of a different characteristic — gentle variations on a single voice, as opposed to the former “army of voices”.  It brings with it new qualities. These songs are more personal pop meditations stuck on a single wish and as such, the songs do not wander as much.  They play out as pop songs do and then they end.  They simply stop.  Lovely stuff.

On “A Feeling Like This”, Blouse returns to more familiar movements but it’s of a more refined sort.  An arch guitar line, ghost of the lead line from Sleater Kinney’s “Get Up”.  A dance floor chugging drumbeat and bass interplay in support.  The vocal is a nonchalant echoed memory. And as quickly as it started, it fades away, eroding under its own power.

“No Shelter” and “Happy Days” and “Arrested” swing us back to even more familiar shimmering ground.  “Arrested” adding this fast noodling scaling guitar run halfway through that lifts the track and moves the rhythm left and right and left and right again before fading on away gradually. Attention art-school-types: if you are prone to windmilling solo dance floor takeovers, this is your song.

“Trust me.  Im the one who loves you (now). Trust me I’m the one who dares,” sings Hilton on “Trust Me.” Blouse close out with one more personal meditation. And though the voice is inviting and billowy with delay, the drums and the bass here move at the edge aggressive. This is less of a hypothetical.  This is insistent.  It is an argument.  It all drops away midway leaving only Charlie’s voice making the point with a softly spoken urgency, but only for a moment.  The paces comes back and the songs picks up where it left off — adding more echo, subtle shards of delay and distortion until it ends by at the hand of its own  corrosion and dissolves out.

“Imperium” as an album is a step forward for Blouse. A move into interesting pop power. A sharpened sound.  A hardened form, and these songs sound like they could take-off and tear-up live.  As I mentioned, there are also some tracks that seem to serve as throwbacks to the earlier Blouse record, which is cool and all that. But the new movement is so “tight” I sort of wish their been more of, if not only that sound on “Imperium”. On the other hand, I know what you’re thinking — review the record you got dumb-dumb, not the one you “think” you wanted.– point taken.