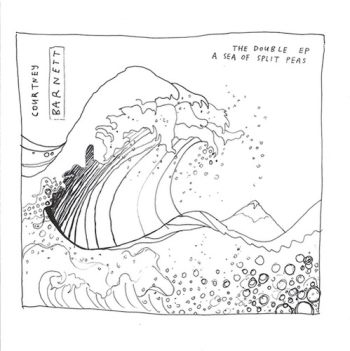 The Double EP: A Sea of Split Peas

In the early 90’s Radiohead made the obvious statement that “Anyone Can Play Guitar”, meaning that most people can string a couple cords together and sing along to make it sound decent. What’s the difference then between those young starving kids that sit along my street, and say Courtney Barnett who for the most part plays those same basic chords on her latest release The Double EP: A Sea of Split Peas? The answer is Courtney Barnett is a born musician, she’s got the soul of a minstrel, and when she takes those basic chords and combines them with her sweet-husky-young voice and her captivating story lyrics, you’ve got a recipe for something special.

In interviews Barnett states she wants to make it clear that this isn’t an album but a double EP, which really just means a collection of songs from a broad period of time. So we can look at this collection of songs then as an introduction to this Melbourne based artist. Barnett’s songwriting style is very story-based, but with a keen ear she never lets those stories take over the melody of the songs, which always keeps them interesting. Early on we find Barnett to be a young-wise-beyond-her-years lady with a keen chip on her shoulder when she souses “just because you’re older than me doesn’t mean you have to be so condescending” on “Out of the Woodwork”. It’s as if her rebellious approach is not to alienate herself from her elders, but to stand her ground with them. She apparently wrote a lot of her songs while slinging pints at a local bar, and while the young starving artist that is forced to work at a place beneath her is a bit cliche, it works because again Barnett has the talent to make it work.

On “Are You Looking After Yourself”, she writes a back and forth exchange with her mother with standard lines like “Are you eating? Do you have money saved up?” then her rebuttal of “I don’t want no nine to five, telling me that I’m alive.” If every young person that ever wanted to do something creative didn’t go through something like this when they were young, they probably did it wrong. We’ve heard it all before, but Barnett presents it to us with earnest conviction.

Her style is mostly impressive because of the confidence she exudes in her songwriting ability. Young singer-songwriters, may hang back and rely on some good hooks, or a minimalist sweet voice, but Barnett just tells her stories through her lyrics and trusts her musical intuition to make it all work. “Avant Gardener” is one of the first instances of one of those stories. Doing a simple task like gardening is just not enough for an overachiever like Barnett, and as you listen to her rambling captivating tale you only wish that you were in some dive bar discovering her first hand. “Anonymous Club” is a another sweet ballad, but it’s “Lance Jr” that seals the deal when she starts the standard folk rock song off with “I masturbated to the songs you wrote.” She’s no Joni Mitchell I’ll give you that, and that’s probably a good thing.

Being an Australian folk artist I don’t see Barnett making huge waves here in North America, but this double EP of sorts is certainly enough to get even the casual listener’s attention. Just as there’s thousand of kids sitting on the sidewalk slinging their songs for coins, there’s thousands of hidden gems like Barnett out there, and only a handful of those will ever break through. I can see Barnett picking up where a young Cat Power left off, but a lot of breaks need to happen for her first. Here’s rooting for her, because it she got the talent for it.