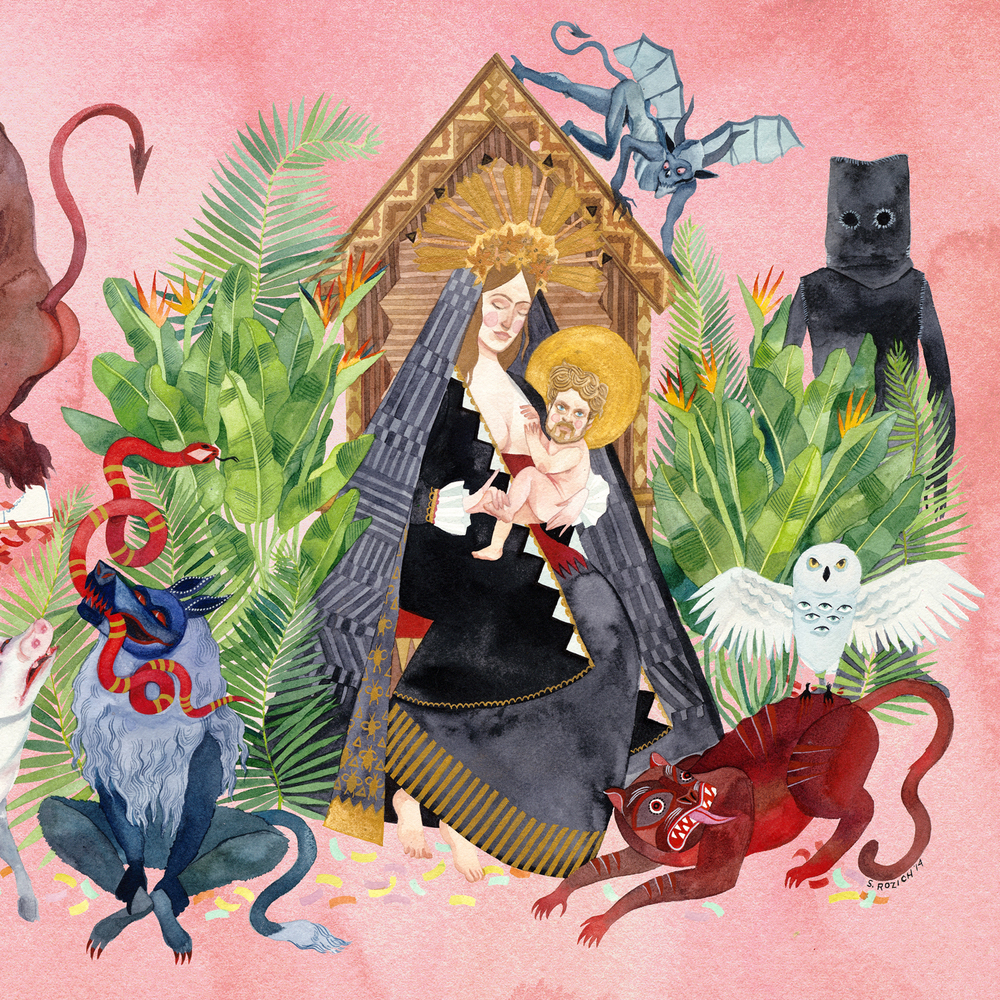 I Love You Honey Bear

Father John Misty, the singer songwriter otherwise known as J Tillman and former member of the bands Fleet Foxes and Saxon Shore is to release his second album under the moniker, out on Sub pop. Produced by Tillman and Jonathan Wilson, the release is a concept album full of tongue in cheek lyrics and sad country folk.

Opener “I love you Honeybear” slowly eases you into the sound for the album, it’s a gloomy, folk inspired song but with a happy undertone; “I brought my mother’s depression, you’ve got your father’s scorn and a wayward aunt’s schizophrenia. But everything is fine, don’t give in to despair, ‘cause I love you, Honeybear.” The second single from I Love You Honey Bear “Chateau Lobby 4 (in C for Two Virgins)” is filled with brass, strings and an upbeat rhythms section. The track is full of the bigger questions; “What are you doing with your whole life?” and some more flippant comments too; “I wanna take you in the kitchen, lift up your wedding dress someone was probably murdered in”.

Electronic pulsating sounds run through “True Affection” and swirl and dance before the lyrics come in. Tillman’s voice reaches true high notes in beautiful harmony with the synth progressions; indeed the song pushes and pulls with a brilliant combination of these elements. The song is a point of difference in the release however, and country folk connects the rest of the dots in the likes of “The Night Josh Tillman Came To Our Apartment” and “Nothing Good Ever Happens At The Goddamn Thirsty Crow”.

Not unsurprisingly, “When You’re Smiling And Astride Me” has a sass about it, and female vocals hover in the background, adding to the soulful feel of the track.
Piano chords come out for “Bored In The USA” which is another sombre number; “I’ve got a lifetime to consider how disappointing I’ve become to you as my beauty warps and fades, I guess you feel the same” and “Is this the part where I get all I ever wanted? Who said that? Can I get my money back?” and all the while, sitcom laughter echoes behind his feelings to really drive home the despair.

Some lovely strumming opens the closing track “I Went To The Store One Day” which, with its combination of strings and Tillman’s cutting lyrics ends on a rather sad, existential note. These themes running through the album lead you to believe Tillman may have been going through a rather hard time of late – and this is backed up by a quote from Sub Pop’s website; “I Love You, Honey Bear is a concept album about a guy named Josh Tillman who spends quite a bit of time banging his head against walls, cultivating weak ties with strangers and generally avoiding intimacy at all costs.” He says “My ambition… was to address the sensuality of fear, the terrifying force of love, the unutterable pleasures of intimacy, and the destruction of emotional and intellectual prisons in my own voice.” And he does so, with some intelligent and honest song writing and passion in his voice.