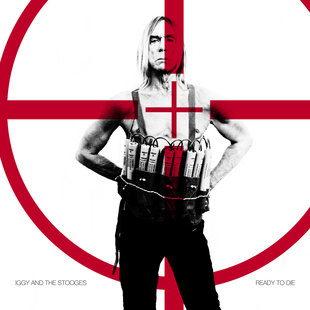 Forty years is longer than an eternity in the world of music and this is the exact vacuum in time since Iggy Pop and Stooges guitarist James Williamson have recorded together, the last record they both contributed on was the band’s seminal effort, Raw Power. Fast forward four decades and check in with Pop, 66, Williamson, 63 and The Stooges (original drummer Scott Asheton and Mike Matt on bass, taking over duties from the late Ron Asheton) because they are Ready To Die, or more accurately this is the title of the reunited foursomes latest slice of garage punk.

Quite some time has lapsed since Raw Power tore punk a new ass however The Stooges have maintained that primal force that helped them pioneer punk rock. A large proportion of Ready To Die rages with jagged guitar stabs and animalistic drumming. There are few variations from the punk blueprint, ‘Sex and Money’ introduces poppy vocal “ooooo’s” and the occasional toot of brass while there are clutches of tracks that could almost be regarded as ballads where Iggy and The Stooges take on a country bent. Band wise their rhetoric is untouched however it’s Pop’s vocal that has lost some of it’s bite. ‘Search and Destroy’ from Raw Power had Iggy declaring “I’m a street walking cheetah with a heart full of napalm”, this time around he’s a backyard prowling housecat with a ticker full of heartburn. The vitriolic howl from Pop has been dampened over time and with that his feral snarl manages to dilute the punk bombast The Stooges are spewing out. ‘Dirty Deal’ and the title track manage to resurrect the instant punk strut of the old days but it’s tracks like ‘Burn’ where Pop sounds weathered and lacking in the ferocity you’d want from punks torchbearer.

Not unlike Green Day recently musing about playing spin the bottle and partaking in some ‘Fuck Time’, when Pop proclaims his love for girls with big boobs on ‘DD’s’ it all sounds too creepy especially when it’s coming from the mouth and mind of a 66 year old. Instead of dripping with sexual intensity this ode to mammary glands makes Pop sound like that weirdo uncle most people try to avoid at family get-togethers.

Vocally Pop may be lacking when The Stooges are at full tilt but when the four piece slip into ballad mode, this is when the Godfather of punk sounds like a leathery vocaled Johnny Cash. ‘Unfriendly World’ manifests a country slant with Pop reflecting on life’s hard times. Closing track ‘The Departed’ sums up Pop and Ready To Die perfectly, the tracks dusty rhythms paint a picture of the sun setting on punk’s anarchy almost like Iggy and The Stooges are embarking on their twilight years. “Party girls will soon grow old” Pop’s weather beaten croon declares and with this lyric in mind, ‘The Departed’ almost sounds autobiographical to what could be the final chapter for Iggy and Co.

Nothing lasts forever and where as you wouldn’t want Iggy and The Stooges to croak any time soon, Ready To Die perhaps should be renamed Let’s Give Punk One Last Shot and Then To Bed.