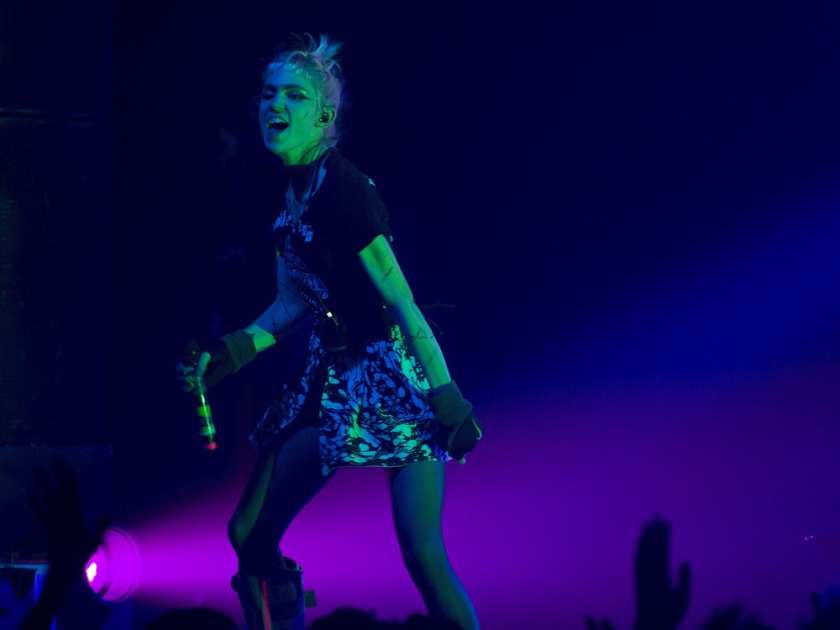 Yesterday (November 21) was the final day of the four-day long M for Montreal festival. Closing out the festival at Metropolis was hometown hero, Claire Boucher a.k.a Grimes.

Once the classical music on the speakers at Metropolis stopped, a roar of anticipated cheers ensured, and a dancer dressed in glow-in-the-dark-type street gear, came out to “Laughing and not being normal”, while Claire, sporting a Motörhead shirt scurried to her motherboard station of synthesizer and samplers to start off “Circumambient”. The station clad in camouflage and flowers, wasn’t enough to hide Boucher or hide the fact that she couldn’t keep herself from cracking a smile before running toward the stage to greet her fans and accompany her dancers.

After touring as Lana Del Rey’s support this summer, there was no doubt that Grimes’ reach finally caught up with her ambition, especially evidenced by a sold out performance, but also a return to Montreal. “ I learned to make music here,” she declared sincerely with a certain shy, nervous energy, also adding that M for Montreal put on some of her first shows in Montreal. Now touring her new, highly acclaimed album “Art Angels,” it’s the first time she’s played in Montreal since its release.

Blasting early on into familiar favourites like “Genesis,” songs which Grimes has said she hated in past interviews, was unable to contain a laugh and smile as the crowd erupted with excitement. The tracks brought the crowd right back to Grimes’ breakthrough, 2012’s Visions, but were given special treatment; as they went into complete party mode. Grimes’ live music is certainly a different beast. With Grimes refining her craft on some of her earlier tracks, “Genesis”, “Oblivion”, and “Be A Body” saw her tinkering with a different approach, especially on the latter. “I spruced it up a little bit,” she mentioned before lasers pierced through the crowd, treated to a newly reworked version of the track; a joyful multi-sensory experience.

She swung and spun her pink ponytail aggressively. Totally immersed in her music, as anywhere from two to eight dancers, pranced around on stage, and Grimes’ light show flooded the Metropolis. At times I would have liked to have seen a more live aspect to the performance. Grimes triggers her samples and then runs back to the crowd, singing over her synth powered cuts. But aren’t we all here for the performance?

After a frenetic hour of Boucher running to and fro from her station, prowling through her dancers like a scientist gone mad, she confessed she gets stressed out about an encore – “If it’s okay with you guys, for my own mental health, can I just play the encore now?” – even in a crowd of her deepest supporters. Grimes hasn’t lost her innocence, she’s still her same old effervescent self, instead channeling her craft (and production heavy tracks) into something of a statement-making career.

Sly and seductively, she burst into “Kill V. Main,” one of her favourites off the new album. A punk-pop anthem of sorts that left the attendees wanting more, throwing out a energetic “holy fuck!,” sending her audience out on a visceral note, unsure if she was in fact serious about her whole no encore preference.