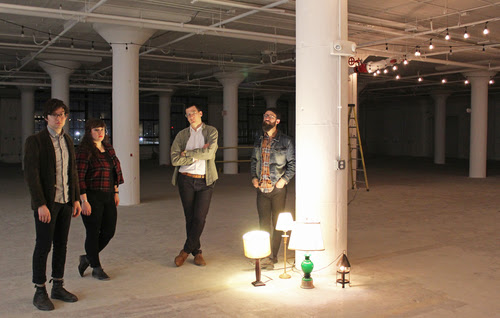 Bent Shapes make their Slumberland Records debut on March 11th with the release of Wolves of Want. The Boston band’s new album recorded with Elio DeLuca of Titus Andronicus. “Realization Hits,” is the album’s second single.

“Realization Hits” was one of the album titles I was kicking around,” vocalist Ben Potrykus explains. “I read the phrase “when depression hits” and joked that “depression hits” could describe a whole genre of music. I figured these songs were “realization hits” in that they were about certain epiphanies I’d had over the course of the last year or two. The song itself describes the struggle that comes with trying to eke out a living while making a life. Revolutions (artistic and otherwise) are commodified, repackaged, and sold back to the people who created them by the culture industry, and it’s hard to sell things that actually challenge social mores.”

Bent Shapes spent early 2015 recording Wolves of Want with Elio DeLuca (Titus Andronicus), although Potrykus and Sadoway began writing what would become their second album long before Feels Weird was even released. “The basic format for how songs came together was the same: Ben would write a guitar riff or vocal melody along with some chords and then we would hash out the arrangement in our rehearsal space,” explains Sadoway. The band took their biggest risk in the studio, electing to record Wolves of Want purely analog with 16 tracks. “Even with a relatively small number of tracks, we were able to bring in some additional instruments that we hadn’t added to our palette before: cello, trumpet, trombone to name a few,” says Sadoway. “My favorite part of tracking was when Luke and I got to play a Steinway grand together during the outro of ‘New Starts in Old Dominion.’”

Thematically, Wolves of Want is an album full of meditations on mental illness, the struggle to bring goodness into the world, and faith in humanity as a renewable resource. These themes are particularly personal to Potrykus who was diagnosed with multiple anxiety disorders after experiencing acute symptoms on-and-off for years. “I talk about it openly, because what helped me when I felt isolated and alone was reading books and listening to interviews by comedians and writers that had dealt with the same thing. The mainstream perception of a given disorder isn’t always accurate, and I don’t want anyone to feel like I did when things were at their worst,” explains Potrykus. “Writing about it was cathartic for me, as well — documenting how I was feeling gave me a way of contextualizing a personal crisis that made it seem like something I could overcome.”

Wolves of Want will be released by Slumberland Records on March 11, 2016