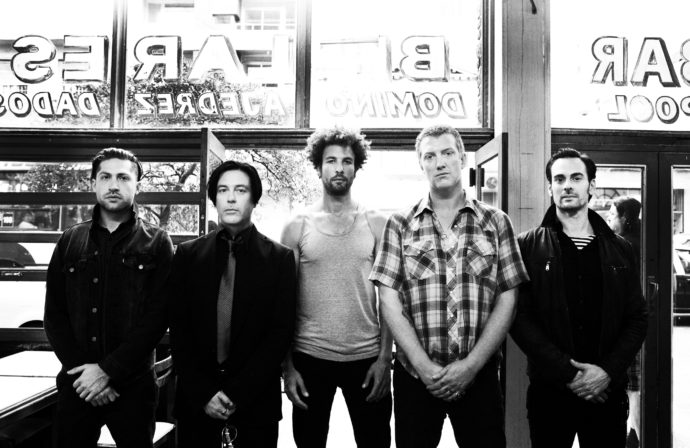 The video for “The Way You Used To Do,” taken from Queens Of The Stone Age’s full-length Villains, is now available via Youtube for the first time. The devilish promo has been realised as a fever dream Satanic dance ritual extravaganza—featuring QOTSA founder and frontman Joshua Homme lighter on his feet and darker in his soul than ever before. Conceived by Joshua Homme, directed by Jonas Akerlund and produced by Serial Pictures, “The Way You Used To Do,” somehow fit its multiple sets, wardrobe changes and intricate dance routines into one day of shooting in Los Angeles. Considering potential reactions to the sinister shuffle of “The Way We Used To Do” being translated into a panoramic soul-selling dance trip.

Josh Homme on the video:

“It’s our way of paying tribute to Cab Calloway and the film Hellzapoppin’. I fully realise that may be a little more than some are open to, and that’s perfectly fine with me. There’s the door. If some of the more close-minded are gently pruned, that just leaves more room on the dance floor for the open-minded ones to get loose. That’s been the spirit of Queens Of The Stone Age and the space we’ve worked to create from day one.” Villains was co-produced by Mark Ronson is out now on Matador Records.

The Nick Alexander Memorial Trust (NAMT) has announced that Joshua will be performing an acoustic set as part of the second annual A Peaceful Noise show in aid of NAMT and Josh’s Sweet Stuff Foundation at ULU Live on 25 th November. A founder member of Eagles of Death Metal, whom Nick was touring with in November 2015 when the attack at the Bataclan took place, Joshua is a valued supporter of the Memorial Trust and we are hugely honoured to have him join us for our flagship fundraiser. With sets from False Heads, Frank Turner and Band of Skulls Joshua’s appearance makes an already legendary night truly unmissable. see details here