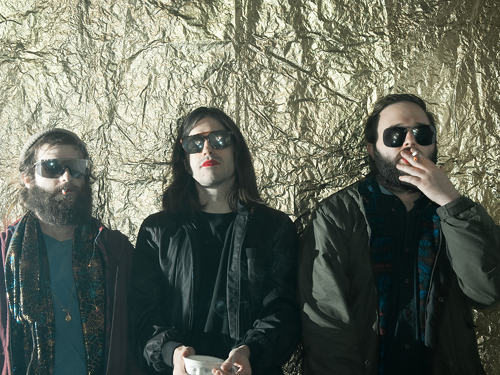 Pure X will release their second album, Crawling Up The Stairs on May 14 on Acephale Records in North America; worldwide on Merok.

Crawling Up The Stairs is the second LP from Austin, Texas’ Pure X. Made up of principal members Nate Grace, Jesse Jenkins and Austin Youngblood, they stay true to the dense sound they explored on their last album, Pleasure, but add twinkling atmospherics and a new clarity to their carefully cultivated, emotionally heavy songs.

Crawling Up The Stairs is an album born from emotional turmoil. For much of 2012, Grace was laid up with a serious leg injury. During the recording period, he had no insurance, no money, and if he ever was going to walk again, he needed to have surgery. Grace had no idea if he’d get the money together, and was consumed with doubt, unable to sleep. After a cathartic but torturous night of insomnia, heavy with world-worry and intermittent nightmares, Grace emerged feeling exhausted and different. Not better or worse, but different. Ready to heal. Crawling is the result of that. Track by track, Grace, Youngblood and Jenkins—who shares vocal and songwriting duties—drag themselves through a bad year.

But Crawling isn’t entirely dark. Album closer “All of the Future (All of the Past)” is the record’s most optimistic song. As if Grace, Jenkins and Youngblood have finally emerged from an endless parade of bummer moments with newly optimistic perspectives on life. “I can see the light/just got to stay alive,” Grace sings. It might read as desperate, but Grace, for the first time, sounds confident that they’ll make it no matter what.

01 Crawling Up The Stairs

03 Written In The Slime

05 Things In My Head

07 I Come From Nowhere