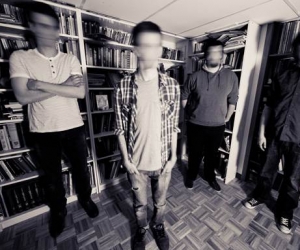 All the members of Toronto four-piece punk outfit PUP are completely broke, and they love it.  Leaving the world of crappy day jobs behind them, PUP now follows four rules for living a better life: 1) Play music everyday. 2) Play music every night. 3) Get wasted once-in-a-while with your friends. 4) Stay broke and be happy.  And so far, Plan A is really working out. They’ve signed to Royal Mountain Records (Hollerado, Jaime Gilmartin) to release their debut full-length album this fall which they just finished recording with legendary producer Dave Schiffman (Weezer, The Bronx, Rage Against The Machine, Mars Volta).

“Reservoir”, (Listen above) the new single from their upcoming album, should give you a good idea of the what the band is up to because it’s a complete shit-show.  It’s two and a half minutes of reckless, visceral energy, recorded live off the floor by Schiffman.  On the surface it’s the get drunk and party track on the album, but it’s also about not being a total bummer of a person.  “Reservoir is about taking responsibility for your own happiness, and not letting people dick you around and bring you down just cause they’re too lazy to try and change,” says vocalist Stefan Babcock.

Together since 2011, PUP has shared the stage with Sloan, Titus Andronicus, Tokyo Police Club, and Born Ruffians.  Having already toured North America with Hollerado, the new label-mates will return to the road, sharing a pair of shows in Oshawa and Toronto.  Their forth-coming full-length album will be released this fall on Royal Mountain Records.

* with The Dirty Nil