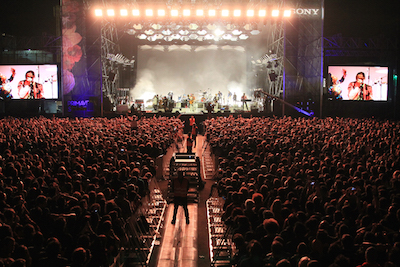 The concerts by Umberto & Antoni Maiovvi and Iceage will be the starting signal of a week full of live music that starts tonight in the sala Apolo with Primavera als Clubs and that will go on until Wednesday 27th May. The festival programme kicked off at the end of April with the Primavera als Barris and Primavera als Bars concerts in different cultural centres and venues around Barcelona.

The celebration of the fifteenth anniversary will include the participation of 217 bands and artists who will play a total of 295 concerts, 189 of which will take place on the Parc del Fòrum site. Of the 106 remaining concerts, that will take place within the framework of Primavera a la Ciutat, 70 are totally free with performances that go from the showcases of emerging bands from the countries participating in PrimaveraPro on the stage in the MACBA to the concerts of Els Vermuts de Primavera al Parc amb Martini in the Parc de la Ciutadella or in La Botiga del Primavera Sound, as well as other music related activities such as the documentaries of In-Edit, that complete the wide range of cultural activities on offer to all audiences.

On Wednesday 27th May, the Parc del Fòrum will open its doors to the public free of charge for the inauguration day. The first band to play the ATP stage will be Las Ruinas, followed by Panama, Christina Rosenvinge, Cinerama, Albert Hammond, Jr. and Orchestral Manoeuvres in the Dark (OMD). From Thursday 28th the rest of the stages will open too:

In parallel with the celebration of Primavera Sound, the meeting of the music industry PrimaveraPro will tackle the fascinating transition that the sector is undergoing from its new headquarters in the emblematic MACBA (Museo de Arte Contemporáneo de Barcelona). At this edition it will host over 90 activities programmed from 27th to 29th May, with the participation of more than 140 speakers who will debate aspects such as the challenges of streaming platforms, the future of large festivals and the strategies for breaking into the Latin American and Asian markets will be discussed. Also a total of 34 bands coming from nine of the countries participating in the professional meeting will play 70 concerts all around the city, from Parc del Fòrum to Plaça dels Àngels (MACBA).

At its sixth edition, PrimaveraPro increases its commitment to the industry through the organisation, for the first time, of two international congresses: that of Independent Labels (27th May) and that of Concert Venues (28th May). At the same time the support given to business initiatives focused on the world of music is consolidated via the second edition of PrimaveraPro Startups 2015.

The meeting that will bring together the most important voices of the sector in the city of Barcelona will celebrate its inauguration dinner on Wednesday 27th May in the MACBA during which the Primavera Award 2015 will be presented to Barry Dickins and Barcelona’s week as music capital of the world will be officially inaugurated.