Popstrangers reveal the second single “Don’t Be Afraid” off their forthcoming sophomore release, Fortuna.  Joel Flyger says the song is about “giving everything you have to a relationship but knowing that it’s not enough, or good enough. Desperately needing to know the truth about what’s going on, even though it’s going to kill you to hear it.” He adds, “I feel lyrically it’s the most honest and upfront song I have ever written.” Carpark will release Fortuna on May 27th.

Fortuna, the second full-length from New Zealand trio Popstrangers, trades the grunge revivalism of the band’s previous releases for buoyant hooks and ’60s pop. Pairing their minor-key riffs with pervasively melancholic songwriting, the band’s refined sense of melody is on full display on Fortuna, which echoes the classic guitar pop of their homeland’s Flying Nun Records.

Recorded over five days in London, Popstrangers’ warped tales of infatuation and aggression are anchored by Joel Flyger’s tactile vocals, which are steeped in subterranean effects before ripping clean through the album’s choruses. The band’s pop sensibilities are at their best on standout “Country Kills,” where Flyger shrugs off his looming demise with a wink and an indelible riff. “My country will kill me now, but whatever.”  The band is quick to temper Fortuna’s catchy strains with atonal guitars and a nervous pace, the record’s building sense of anxiety concluding with the psych comedown of “What’s On Your Mind?” 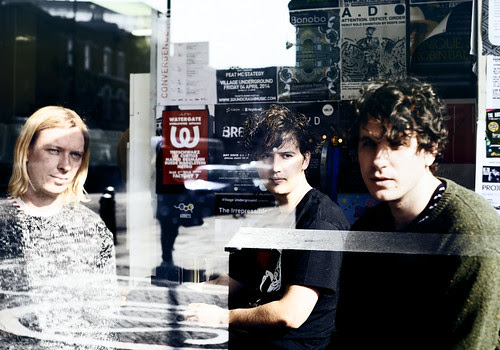