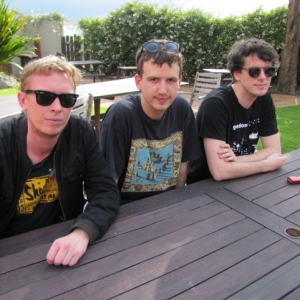 Popstrangers had this to say about the song, “We had been listening to “With A Girl Like You” quite a bit late last year and naturally started to play the song at band practices. That led to occasionally including it in our live set. The response was always really good so we recorded it one evening with our friend Ed. We probably had a few ideas of how we could make it our own, but in the end the original was just so good we kept it pretty similar. It was sad to hear that Reg Presley passed away recently. The fact that people in their 20’s living at the bottom of the world are still thrashing his song proves how great it is.”

Comprised of New Zealanders Joel Flyger, Adam Page and David Larson, Popstrangers make “pop” music that’s hard-driving, punk-influenced and sonically inimitable. Popstrangers formed in 2009 after the three members connected over their shared histories of bad day jobs, stints in other bands and, most importantly, their desire to create music with like-minded people. With a name conceived last-minute before their first official show, their ambitions have grown since the days of playing local gigs around Auckland. After releasing several singles on the legendary Flying Nun label.