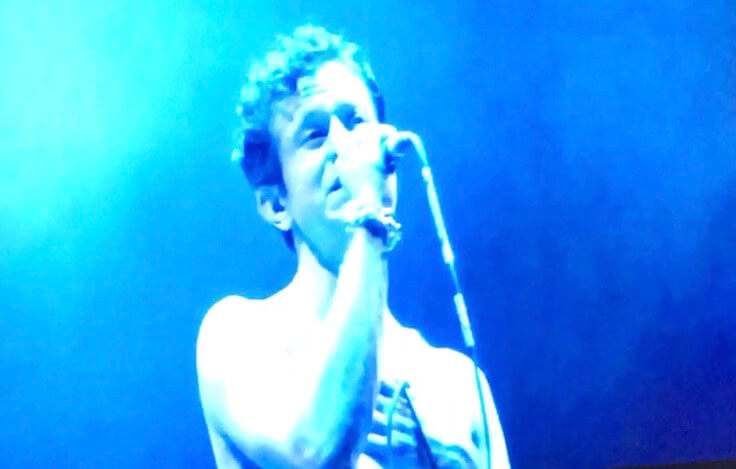 The live concert experience is something we all haven’t experienced in months. While this may not be a huge problem for many, for die hard music lovers, it’s been tough. When lockdown hit it seemed there were a million artists live streaming sets from the respective homes and studios. Some of these were decent and many were marred with technical issues but overall, regardless of quality, it was never a suitable alternative to being in a venue with hundreds of other fans anxiously awaiting the arrival of your favourite artist to the stage. Some time has passed and certain artists have been able to find ways to bring the concert experience into your home. The latest and best, so far, was today’s majestic Perfume Genius show live from Los Angeles’s Palace Theatre. Perfume Genius aka Michael Hadreas released his beautiful new album. Set My Heart On Fire Immediately, in May of this year. It was already too late for him to take his vision of what this record should be like in a live setting on the road, and in the meantime he has performed various stripped down sets of that album’s material online, but now with this afternoon’s live stream, him and his crack band were able to show fans all over the world what the show would’ve looked and sounded like.

In all honesty, it’s tough to feel like you are really experiencing a concert from your living room at noon on a Saturday. You are at the mercy of whatever your limited technical set up is and the lack of audience participation is somewhat jarring but Perfume Genius pulled it off spectacularly. The setting of the Palace Theatre, America’s oldest orpheum style theatre, was a wise choice for the event. The theatre has a certain energy and without an audience to fill its space, it seemed to almost play its own character in the proceedings, giving the show an extra dimension. The band, made up of Hadreas, Alan Wyffels, Meg Duffy of the great Hand Habits, Pat Kelly, Greg Uhlmann and Tim Carr, were all amazing top notch players absolutely breathing new life into the songs we’ve been digesting over the last few months. Added to this was a string section, of Anna Bullbrook, Rhea Fowler, Elizabeth Lauren Baba and April Dawn Guthrie, all following safety protocols beautifully by wearing masks and elevating the songs to an even higher level. Hadrea’s voice is gorgeous and filled the Palace, you could hear the diminishing end of the notes float off into the empty auditorium, and his contorted dance moves only added to the experience.

The show was lovingly filmed by cinematographer Adam Gundersheimer. There is a beautiful illusion of it being on film, with a grain that filters through the moody blue and white lightning on the bare stage, save for the six piece band and their instruments. Shots of the theatre’s empty seats transition into the band quietly taking their places before the entrance of Hadreas as they kick into show opener “Your Body Changes Everything”. It’s a lovely way to ease you into the show, with Hadreas and the band warming themselves up for what it to come. Over the next hour and a half, Perfume Genius showcase much of the new record in all of its splendour. The string section lifting up this rendition of “Without You”, a soulful version of “Jason” in which Hadreas releases himself of his blazer while the band gently harmonizes the song’s “oooos” and an achingly gorgeous version of “Whole Life”. During moments of “Some Dream” we are treated to what the live stream experience can bring us in comparison to seeing a band in person. The multiple vantage points capture the musicians faces as they crescendo into the song’s climax. It’s rather cool to see Meg Harris using her e bow and slide and watching drummer Tim Carr gently crash his cymbals up close and personally. The set comes to a spectacular close with the band laying into the song “Queen” off of 2014’s Too Bright. It’s a beautiful conclusion to a wonderful show with Hadreas saluting the empty auditorium as the screen splits so we can see the band’s denouement and his walking offstage into the bowels of the theatre.

The set list is purposely not being spoiled here because you can still get tickets to watch the show for the next 24 hours and if you are a fan of Perfume Genius or live concerts in general, this does come highly recommended. While there are certain aspects of this that can’t duplicate seeing Perfume Genius live, it is a nice substitute. We as viewers are slightly at arms length through the whole proceedings. The songs do come off beautifully but it doesn’t compare to actually hearing Hadrea’s voice and the bands masterful dynamics in person and as loud as possible. The intimacy of watching them all perform in an empty room makes it feel more like a dress rehearsal for something to come and, with a little patience and time, hopefully that something will come before we know it.