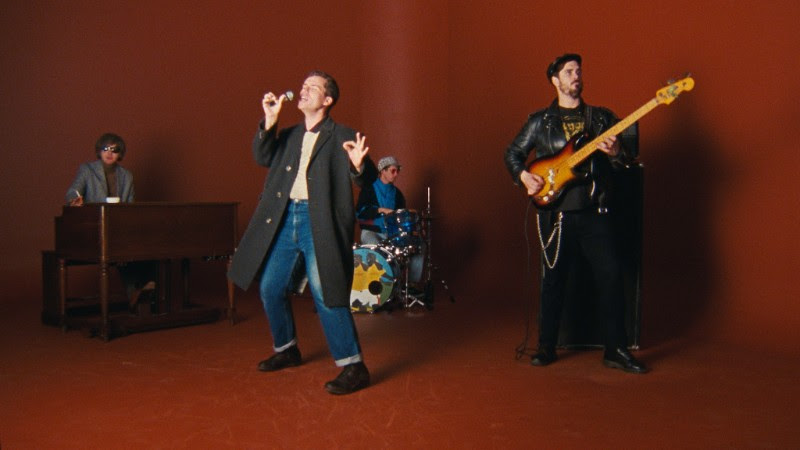 Parquet Courts have released a new video for “Freebird II,” the track is off their current release Wide Awake! (Rough Trade). A. Savage of Parquet Courts and director Claes Nordwall had this to say of their collaboration.

A. Savage:
“I wanted to work with Claes Nordwall again, who shot the video for “BERLIN GOT BLURRY”, not just because he’s got a talent for shooting on 16mm, but because he has a great eye and is good at helping me articulate visual ideas for the screen. It was a lot of fun to film. Originally there was a shot of us ripping up a confederate flag in the video, but we decided it wasn’t obvious enough that the flag was getting destroyed, so we cut it. But just in case you were wondering, we are not fans of it. It was fun dressing up for this; everybody was assigned a character that fit their personality. Thanks to everybody who worked really hard on this video… Claes, our choreographer Juri, and Brittney who made sure all the moving parts, well, moved. It was the biggest crew we’ve ever worked with and we’re all very thankful to them because it came out great!”

Claes Nordwall:
“After collaborating with Andrew on the Berlin got blurry video I knew that I wanted to work with them again, we really strike the same chord with how we envision these videos playing out and I was thrilled when I was asked to direct a performance video on 16mm. They all have such great dry/deadpan live personas, some innate ability to carry a non-self conscious bravado attitude that bands like Talking Heads managed to pull off way back when. It’s rare nowadays.”

Additionally, the band have announced new tour dates for the winter, including shows at some of the biggest venues they’ve played at yet, such as New York’s Hammerstein Ballroom (with the legendary Sun Ra Arkestra) and Chicago’s Vic Theater. Tickets for these shows go on sale Friday, August 3rd at 10AM local time.