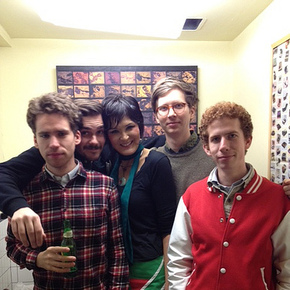 Parquet Courts are heading down south to the Mecca of tacos, Austin, TX, for a flurry of shows at this year’s SXSW festival. After that, they’re heading overseas to the UK for their first-ever shows outside of North America Following a little time off, the band will embark on their largest tour of the US yet, part of which will see them sharing the stage with killer Australian outfit Total Control. Dates are listed below.

With the record being initially available since June, and with the wider release coming in January, people are understandably chomping at the bit for new music from the band. Well, wait not more. Here’s a b-side off their upcoming single for “Borrowed Time,” (What’s Your Rupture?) entitled “Smart Aleck Kid.” Revel in all one-minute-six-seconds of its glory. Order the 7″ here.

Listen to “Borrowed Time” off Light Up Gold here: http://bitly.com/Pm9Fir

Listen to “Stoned and Starving” off Light Up Gold here: http://bit.ly/136XoRv