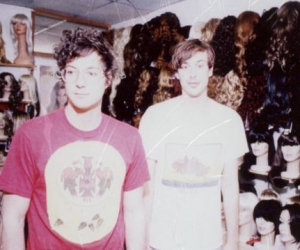 San Francisco’s psych-pop duo Painted Palms release a surprise five-song EP entitled Nothing Lasts Long. The EP is the result of an interest in classic psychedelic pop and modern electronic production. It was made in the spirit of a mixtape, borrowing freely and intended as a giveaway.

Painted Palms is the music project of cousins Reese Donohue and Chris Prudhomme. Their collaboration began as song ideas passed back and forth via email, but didn’t truly take shape until of Montreal frontman Kevin Barnes discovered their EP online and invited them to open for of Montreal on a nationwide tour.

Shortly after the tour began, Painted Palms’ self-released EP, Canopy, was re-released by Secretly Canadian. The band continued to tour the US over the next year, opening for the likes of STRFKR and Braids to name a few.
Painted Palms spent most of 2012 writing and recording their debut album, which is expected to see release later this year.