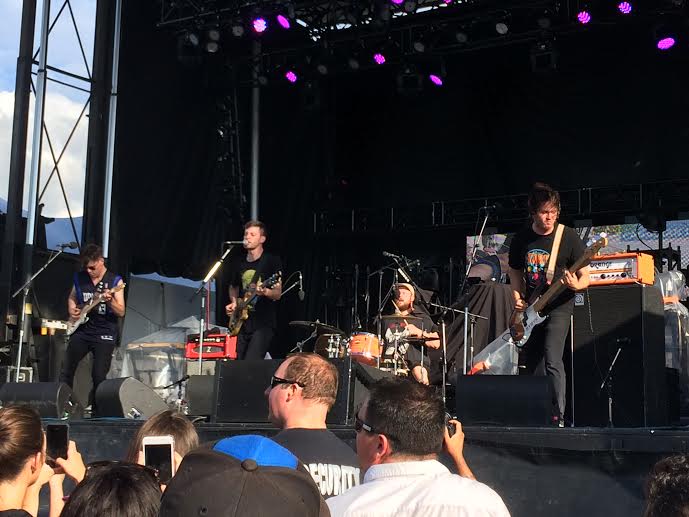 Thursday marked day six of Bluesfest. The sun was out and a nice breeze was floating in off the Ottawa River when PUP opened at 6 pm on the Monster Energy Stage. Their name is supposed to stand for “Pathetic Use of Potential”, but the Toronto punkers really brought it to Bluesfest, playing material mixed from their self-titled debut and their recent sophomore album, The Dream Is Over. It was a great show that sparked one of the friendliest mosh pits I’ve ever seen—even the security was laughing as they tried to grab crowdsurfing kids. As a plus, PUP played their ‘first ever festival encore’: Weezer’s “El Scorcho”.

A surprise hit for me was Quebec electro-rock band Rebelle, playing the Monster stage from 8 to 9. Chanting, almost poppy choruses, synth melodies, and a heavy post-punk sound collected for a strong performance from the young band. I also have to give props to the lead vocalist’s scratchy screams, which never lost their power for the whole set. The rest of the night met with some disappointing delays and thunderstorms.

Jumping to day seven of Bluesfest, the schedule was full of local talent as a means of balancing out heavyweight headliners the Red Hot Chili Peppers. At the Claridge Homes Stage, the Yips brought a loud garage rock sound, fueled by fast and clever bass grooves and punchy female vocals. I would say they could’ve shown a little more chemistry and reaction onstage, but they seemed more focused on delivering their material as quickly and as solidly as possible in advance of their debut LP said to be coming this Fall.

Over at the City Stage, another local talent, the Steve Adamyk Band, brought a familiarly old-school style of pop-punk akin to the early work of Green Day. They blitzed through a huge setlist of short songs (some good, some much less so) and still had about twenty minutes to spare, so they played tracks off a forthcoming album.

Over at the Black Sheep Stage, DJ duo Zeds Dead drew out a tightly packed crowd for one of the most impressive electronic shows I’ve seen in a long time. Their production was relentlessly exciting, from the blasting smoke machines and spinning lights to the psychedelically disturbing onscreen visuals. They showed they knew how to work a crowd from all walks of electronic music—house, dubstep, hip hop, and even throwing in cleverly selected samples from instantly recognizable rock and pop songs. Definitely a standout performance of the entire festival so far, and a good bookend to a slower pair of days.