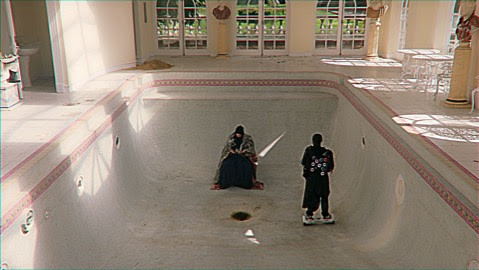 Nine days from the release of the new Oneohtrix Point Never album Garden of Delete, we can now see its lead single, “Sticky Drama” and accompanying film by Jon Rafman and Daniel Lopatin.

Both Parts can be seen below, at the bottom of the page.

“Sticky Drama” is arguably the irregular-beating-heart and lyrical inspiration of Garden of Delete. It ensnares Lopatin’s hyper-attuned pop tendencies, as well as his reckless sonic trips into the void, and emerges as beautiful vertigo; a thorny, encompassing, truly groundbreaking classic.

With a cast of over 35 children, the film tunes into this musical ambition, bringing to life a fantastical world in which characters are on a quest, battling for dominance and in a race against time to archive past histories. Inspired by the costumes, staging and extended improvised narratives of Live Action Role Play (LARP), the video reflects the vivid, often violent world of children’s imaginations and games, as well as extending both artists’ ongoing investigation into appropriation, the nature of memory and the horror of data loss.

The piece was originally commissioned by the Zabludowicz Collection in conjunction with Warp Records. An alternative edit of it has been showing as part of Rafman’s multi-format exhibition currently showing in London.

“Sticky Drama” follows “I Bite Through It” and “Mutant Standard” as advance music from the album, as well as an intricate web of abstract interviews, websites, snatches of film and audio.

Oneohtrix Point Never also takes a new live performance developed with long-time collaborator Nate Boyce to select cities. Shows in London and New York are already sold out with few tickets remaining at others, so be sure to check.