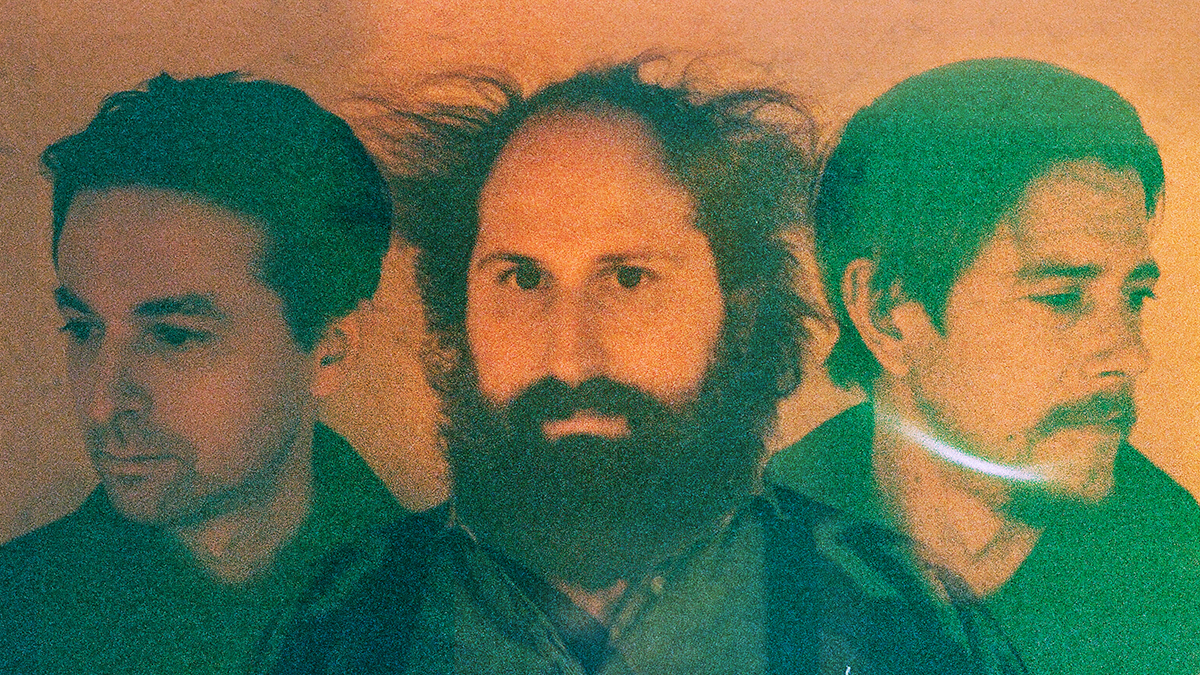 Muzz may be a brand new band but you should know each of its three members. The project, from Interpol’s Paul Banks, multi instrumentalist and producer Josh Kaufman (The Hold Steady, The War On Drugs and The National) and Matt Barrick of The Walkmen and Fleet Foxes, craft thoughtful, widescreen songs that are heavy on mood and beauty. The band came together after years of knowing each other. Banks and Kaufman actually went to high school together and both have played in various studio sessions with Barrick. In 2015, Kaufman and Barrick met up after playing on Barrick’s former The Walkmen bandmate Walter Martin’s solo album. The pair started throwing around ideas, demoing songs and then brought in mutual friend Banks to round out the lineup. While the three musicians are very busy, they all managed to get together when they could and their eponymously titled album is the result of this effort. The tracks that make up the debut take their time and slowly sink into your head with every listen. There is a pastoral quality to the record. It wraps around you like a warm blanket and conjures up cinematic soundscapes. When we catch up with Barrick, via Zoom, the thoughtful and prolific drummer is holed up in his studio in Philadelphia and walks us through how this supergroup got together in the first place.

“That term, ‘supergroup’ I don’t really like it,” Barrick says with a laugh. “I think it’s kind of silly, it’s not like we are Temple Of The Dog or something. I was hoping people wouldn’t start talking about this that way. That kind of band seems so contrived. This all purposely came together with these people, friends that you respected. It was much more organic.” As Barrick explains the band wasn’t in any rush to put music out. They were just having a good time creating something new and working together. “It was a lot of time really spaced out over a few years,” he says. “Since we got rolling we would get together at the studio in Woodstock and just start writing there. Sometimes we would work on things separately but a lot of the songs that made it onto the record were just things we would start fresh in the studio. Songs that we made up intuitively.” You can hear this sense of intuition when listening to the record. The songs take their time, almost feeling out the other parts involved. The opener, “Bad Feeling” with it’s sombre gait and Bank’s restrained vocal performance, really set that tone for what is to follow. Barrick’s drumming is intentional and astute while Kaufman fills in the blanks with an amazing amount of class and texture. Inspired by classic acts like Leonard Cohen, Bob Dylan and Neil Young, the group wanted to not imitate the style of those legends but capture the vibe they were able to put onto tape. “Those are all influences and small time classics for sure. We wanted the record to be classic sounding in that way. Really warm with an analogue feel to it. We didn’t want it to come off as too fancy. Just real musicians playing their instruments in a room together. The way Dan Goodwin, who co produced and engineered the album, worked was that he was always listening and recording these things that we were jamming on. Bad Feeling was one of those. Something that we did really quickly, that just had a really nice vibe to it.” Each of the band members were very into capturing these moments. “You are just kind of feeling it as you go. In the beginning we were just trying whatever. There was a Disco-y number early on,” he says with a chuckle, ”and more kind of rocking stuff but then at a certain point we hit on something that we really liked, that kind of fed into more of what the rest of the record would become. These were just the things that we liked the best and it was also the best stuff Paul was coming up lyrically with as well.”

With the album in the can, Muzz now found themselves in the precarious position of putting out a record in the middle of a global pandemic where touring is off the table and now we are seeing, at an even larger level, an outpouring of activism centred around police brutality. “These protests are in response to such a hugely negative thing and I see them as super inspiring.” Barrick says about the demonstrations happening around the world. ”So many people are coming out to support this and I hope that this leads to some serious change and I hope we can all keep up the momentum. The problem is massive and it’s always been there and that is getting so much attention now is amazing.” As far as the fallout of the pandemic is concerned, it leaves the group, and all musicians in general, in a place where no one knows what is going to happen. “We were supposed to play our first show in April and then we had shows and festivals and stuff off and on scheduled for the rest of the year. We had actually never played a show as a band yet and we were looking forward to that.” The prospect of not touring does make it more difficult to traverse how Muzz will be able to promote their record. When it comes to some of the things that many musicians have been embracing lately, such as live streaming shows online, Barrick seems a bit reticent to jump right into that. “I imagine that there must be a way of doing that kind of thing that is interesting. Recording around the house is unfortunately not as exciting as playing an actual show but if we can get the technology to play together that would be nice. We are kind of all over the place at the moment. Paul is in Scotland and Josh is in the middle of moving but I’m sure we will figure that side of it out.”

In the interim though, Barrick is keeping busy in his studio doing remote sessions for acts. “I just finished up some percussion for the new Hold Steady record which is great and played on Matt Berninger’s (of The National) Serpentine Prison album which will be coming out at some point. Working as a musician is feast or famine in a way,” he explains. “It can be super busy then all of a sudden there will be a lot of down time between projects but I’ve been pretty lucky to be involved in so many cool projects.” While the band processes their downtime, we can all enjoy the album they crafted together. Muzz is a wonderful new record from some old friends and one that will find its audience and we will be seeing them perform these special songs, live in front of that audience, in the near future.

Muzz is now out via Matador Records