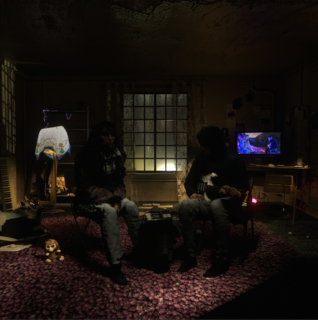 French producer, vocalist and songwriter Oklou debuts a live performance of her recent single “Forever.” Revisiting the locations imagined in the official video, Oklou’s frequent collaborators Kevin and Jordan El Armani, guitiarist and producer Détente and creative director Saradibiza document a tender and intimate performance of her latest single. “The video has been made by me and my friend Sara,” Lou explains. “Can you feel that it has been made by a friend? I do.” “Forever” is available now on all streaming services via TaP Records/True Panther.

Since the release of “Forever,” Lou performed at Pitchfork Paris after being tipped as one of the top five artists to watch at the festival by The Independent. New music and special live shows from Oklou are immient in 2020.
Oklou is Marylou Mayniel. Born and raised in the countryside of west France, Mayniel was classically trained for piano and cello and is a self-taught producer. In addition to her solo work, Mayniel has spun on radio stations like Rinse France, PIIAF, NTS and more with her radio/DJ crew TGAF. She also developed a video game with original scoring for Red Bull Music Academy’s “Digging in the Carts” in 2018. Mayniel’s frequent collaborators and peers include underground and mainstream figures like Coucou Chloe, Sega Bodega, Malibu, Palmistry, Rodaidh McDonald and Chynna, among others, making her a central new voice in Europe’s boundary-pushing electronic music scene. Oklou’s new project is forthcoming.