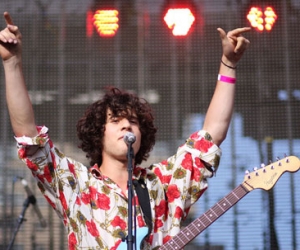 The Brooklyn-via-Washington indie-rock tornado that is Brad Oberhofer and his self-named band are set to release NOTALGIA; a five-track EP of new material, written and recorded in a Brooklyn studio following the band’s extensive touring of their glittering debut album, Time Capsules II, last year. NOTALGIA will be released in the UK on 15th July via Glassnote Records, and Oberhofer has shared a second track from it, in the form of the raging ‘Together/Never’. Stream it here…

Some of the new tracks were written in the wake of Brad Oberhofer losing a friend to drugs, a deeply saddening experience which inspired the feelings and themes explored within the new set of songs.

“When people are addicted to drugs or depressed, they are often sucked into a world that makes it impossible to think beyond sadness or to absorb any emotional support from friends and family,” “In the past few years, I’ve lost some friends to things like this. In those situations, there was nothing I could have said to help them. They couldn’t have heard me if they’d tried.”