On their new album II, set for release on May 12 through Ribbon Music, L.A. Takedown combine the moody grandeur of a film score with pure, pop melodies. Led by Los Angeles-based composer/multi-instrumentalist Aaron M. Olson, the seven-piece band delivers a guitar-driven take on synth-pop that’s inspired its own genre. “Bjorn Copeland of Black Dice once described L.A. Takedown to me as ‘Baywatch Krautrock,'” Olson recalls. “I found myself saying, ‘Well, you know…it’s not not that-works for me!” At times ethereal and frenzied, groove-heavy and narcotic, II is lush with harmonized guitar leads and inspiration from the likes of King Crimson’s Robert Fripp, Japanese composer Tori Kudo, and Nigerian musician King Sunny Adé.

“We live in a world where we’re so inundated with all these pieces of pop culture that they just become part of us,” Olson says. “I like to try to find new ways to present things that are already familiar to everyone.”

The new video for “Night Skiing” sees a driver (played by Stephen Heath, one of the band’s three lead guitarists) stranded in the desert after his car has broken down. He wanders the landscape in search of help only to find a dirty man (played by Olson) in a van who gives him a mysterious pill that transports him to an epic desert jam session. 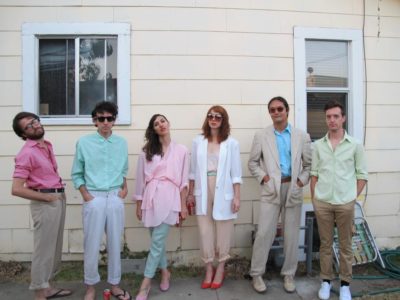